Is the death knell of the Uganda Anti-Homosexuality Bill being sounded? 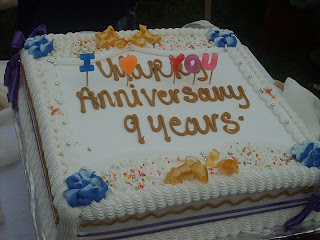 Gug, the gay Ugandan blogger, celebrated the 9th anniversary of his relationship with his partner on Sunday 10th January and posted a picture of the anniversary cake with a moving account of their first meeting and weeks together:

Today he has blogged about the reports of yesterday’s rambling speech by the President on the first day of the meeting of the NRM (ruling party). Unprompted he brought up the Bahati bill, saying there were foreign policy issues to consider, he had had lots of phone calls, and the government was going to talk to Bahati about the bill:

Gug expresses his thanks to all those concerned citizens of the world who have put pressure on their own governments. It is this pressure above all that will do the trick. When we ask our leaders to speak to the Ugandan President, then we are doing LGBT Ugandans an immeasurable service. Thanks, a lot, says gug. Gay Ugandans cannot speak, even when it is their lives under threat.

There is certainly pressure on the government to back down but gug doesn’t know whether it is yet enough. The President has withdrawn from total commitment to the Bill though not very decisively. For the last three months Buturo, and Ssempa had effectively been defining the foreign policy of Uganda but they are no longer being allowed to do so. The government seemed to be paralyzed in the decision making process and for that, gug is cautiously thankful, waiting and watching with bated breath.

During the statement, the NRM members (including MPs) became rowdy, shouting, talking with each other, mumbling, grumbling. The statement was certainly unpopular. But was it the death knell to the kill the Gay Bill? News reports were mixed though some of the pundits were very, very clear that the death of the Bill was underway.
New Vision, the government paper, reported that President Yoweri Museveni cautioned those advocating for the Anti-Homosexuality Bill to “go slow”, saying the matter was a sensitive foreign policy issue. The President said although Ugandans should not allow their values to be compromised, they should equally not move ahead with the issue recklessly.

Museveni said he had been questioned about the bill by several foreign leaders, including the Canadian prime minister, British Prime Minister Gordon Brown and US Secretary of State Hillary Clinton who called him for over 45 minutes over the issue. He told them that the bill was brought up by a private member and he hadn’t had time to discuss it with him.

He said: “It is my judgment that our foreign policy is not managed just by some individuals. We have our values and our stand, historically and socially, but we need to know also that our partners we have been working with have their systems.” Members apparently murmured in disapproval and shouted: “No, no, no!” when he added: “This is a foreign policy issue and we have to discuss it in a manner that does not compromise our principles but also takes care of our foreign policy interest.” The Cabinet had decided, he said, to call Bahati and discuss the bill with him.

The Press has spoken, says gug, and Bahati was on WBS discussing the meeting, still defiant. The matter was not yet settled and he would be talking with the executive and parliament etc.

The one person whose comments need to be attended to when listening to the confusion coming from the Uganda government about the Bahati bill is the President, says gug, and he spoke yesterday with great caution. The Ugandan Government has yet to make up its mind about the Anti-Gay Bill.
Posted by Colin Coward at 09:21