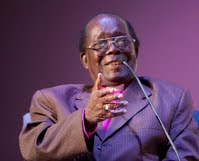 Bishop Christopher Senyonjo who was a member of the Inclusive Church team at the Lambeth Conference in 2008 has just completed a speaking tour in Ireland following an extensive tour of the USA. In Ireland, he condemned what he described as the "draconian" Anti-Homosexuality Bill in his native Uganda. He said, "we should follow the good example of Ireland where you have been successful in seeking and affecting reconciliation."

Turning to the proposed Anti-Homosexuality Bill in Uganda, the Bishop said that "… it criminalises LGBT (Lesbian, Gay, Bisexual and Transgender) people to the extent that even the words 'homosexual rights' must never be mentioned...Failure to report an LGBT person within 24 hours would be a crime...and committed homosexuals would face prison sometimes between 3 and 7 years, life imprisonment or even the death sentence." The Bill he said, "… intends to exterminate homosexuals." He continued, "… by the grace of God, some people are speaking against the Bill, President Obama described it as odious."

Urging people in Ireland to oppose the bill he said, "… they [homosexuals] may be different, and they are, but we should live with differences.” He went on to call for education because, "I have found that a lot of the prejudice against LGBT people comes from ignorance."

He concluded his sermon at Christ Church Cathedral Dublin on Sunday with the prayer. "Almighty God, we believe that in Christ there is no discrimination against race, colour, gender or LGBT people. We pray that you guide us with your Holy Spirit so that all hate campaigns including those against LGBT people may be transformed into peace, justice and reconciliation. Amen."

During his stay in Dublin, Bishop Senyonjo met with Senator David Norris, officials from the Department of Foreign Affairs and representatives of GLEN (the Gay and Lesbian Equality Network).His visit was arranged by Changing Attitude Ireland
Posted by Colin Coward at 13:28