Too good to be true? – Dr Jeffrey John the candidate most favoured by the CNC for Southwark 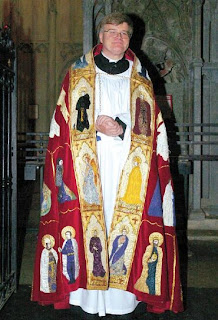 A report by Jonathan Wynne-Jones in tomorrow’s Sunday Telegraph maintains that Jeffrey John, the Dean of St Albans, is understood to be the favoured candidate as next Bishop of Southwark.

If this is true, then it would be with the knowledge and approval of the Archbishop of Canterbury who chairs the Crown Nominations Commission meetings.

Such a move, says Jonathan, threatens to provoke a damaging split in the Church of England (what, another one?) and would trigger a civil war between liberals and conservatives and exacerbate existing divisions within the Anglican Communion.

The report says David Cameron has already been made aware that Dr John is on the shortlist and is understood to be supportive of the appointment as it would reinforce the Conservative Party's drive to shake off its "nasty party" image.

Jonathan used to work for the Church of England Newspaper, which doesn’t necessarily explain why he commits the gross error of claiming that Dr John was consecrated as Bishop of Reading before Dr Williams forced him to resign.

More accurately, Jonathan writes that Dr Williams and Dr John Sentamu (also a member of the commission), will face fierce criticism from the conservative wing of the Church if they allow Dr John to become a bishop. Apparently neither archbishop blocked his name at the commission's last meeting.

I came across the report in a link on Anglican Mainstream’s web site just after I’d completed the Radio 5 live interview with Chris Sugden. How astonishing, I thought.

Jonathan reminds us that Jeffrey is an openly-homosexual cleric and a hugely divisive figure in the church. I guess this language and hyperbole appeals to Telegraph readers.

The Telegraph sees the appointment, if it is made, as a major victory for the pro-gay lobby in the Church of England that could shatter the Archbishop's hopes of maintaining the fragile unity which currently exists in the Church.

If true, then the implications are huge. The Church of England would gain a bishop of immense intelligence and passion. LGBT Anglicans would gain renewed confidence that the Church of England retains a capacity to be (cautiously) radical, inclusive, broad and generous. It would signal a dramatic change of direction in the Communion. Further resignations by conservative members of the Primates meeting, the Anglican Consultative Council and the Anglican Communion Standing Committee might be expected.

The balance of power between conservative and radical groups in the Communion might change dramatically given such a huge reversal following the successful campaign by those claiming to be traditional in blocking Jeffrey John’s appointment in 2003. England might at last be able to stand with our Episcopal Church friends in being honest about the numbers of LGBT deacons, priests and lay people (and bishops) who lead exemplary Christian lives in the service of the gospel.