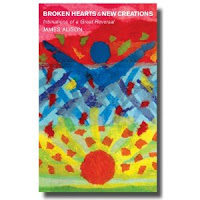 Changing Attitude London and Southwark held a book launch yesterday evening at St Martin-in-the-Fields for two books by James Alison. The focus was on Broken Hearts and New Creations: Intimations of a Great Reversal but the recently revised and republished Raising Abel was also available. Both books can be ordered through the Changing Attitude web site which has one of the most comprehensive online lists of LGBT Christian books (Please let me know of other books that should be added). 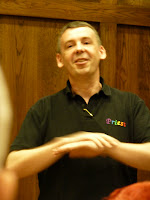 Over 100 people came to hear James respond to questions about Broken Hearts from Clare Herbert, co-convenor of the group. Introducing the interview, Brendan Walsh, DLT’s commissioning editor, described the impact James’s books have made on professional theologians and others. He is, said Brendan, every serious theologian’s favourite theologian – after themselves. He is doing great theology that has real visceral impact.

What has changed?
James said what has changed for Catholics is that being gay has been taken out of the field of doctrine into the human sciences. An anthropological breakthrough has taken place and it is now a grave mistake to think about homosexuality as a theological problem. The basic question is now – Is there such a thing as being gay or lesbian? Is it a form or vice or a pathology? Only in the last 50 years has it been possible to say there is a regularly occurring minority variant which is not pathological, and this is now a real piece of human knowledge which is having big effects in the theological sphere. But we are talking about it in the anthropological sphere now – talking about who are these lesbian and gay humans who are undergoing grace.

Being our self
It is really difficult to step out from being reactive and from defining ourselves over against anyone else as if I can only be myself over against those who are different or who I fear are persecuting me. Becoming who I am going to be involves a huge amount of letting go.

False trails of sameness and difference
Difference, said James, is much exaggerated – there is much more sameness around than difference. Liking people who are like us can be very difficult and we are challenged not to run away from nor be disgusted or frightened when we discover how alike we are to someone else we have been judging. There can be no moral discourse without a basic sense of liking someone and recognising that we are the same as each other. 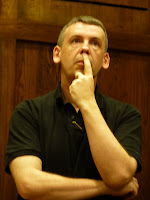 Being Church
It is difficult to ask for what we really want because we are not really sure who we are becoming and therefore, what that might be. Other people want us to become “this person”, the one who fits their idea of us, not our true self. We are failing to be the true church if we don’t make this true, utterly authentic space available to people in which the true self can be found.

Finding faith
James was asked how people can find this kind of faith against apparently impossible odds. So much Christian discourse about faith is emotional blackmail, he responded, the threat that if you don’t believe X or Y you will go to hell. To quote from the book:

“The word ‘God’ for too long has been a cold word describing a powerful object. ‘Creation’ has for too long been a serious, stable, safe background on which a heavy, human morality can be erected, and against which self-regarding approval can be granted. What Jesus did has for too long been described in emotionally blackmailing terms, pushing people into contorted forms of asceticism and fake goodness.”

But there is, he said, a habitual confidence given us by another, the Other other, in whose hands we can relax. How on earth do people find that? – by asking for it. He didn’t call it prayer but prayer it might be. Faith has to be found through discovering that God likes us and understands that we are frightened of self-appreciation. If someone likes you, you drop the mask. Relaxation is the result of someone liking you. Jesus says of God, you can trust me, I am not out to get you. God is nudging us to drop the mask. 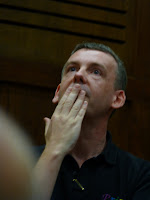 Is there a place in his theology for gay activism and if there is, should we be focussing on gay pride or gay marriage? – yes, attend to both was his answer. We wouldn’t be where we are if it wasn’t for the early activists, GLF, Stonewall, Gay Pride, etc, they opened the doors for us. He was concerned that too much attention might be focussed on gay activism in the church and the amount of emotional and mental energy that goes into trying to change the church. Let’s invest our time and energy where it can make a difference and not invest in fighting a paper tiger – the church will catch up eventually.

Different Christianity
We should be investing our time and energy now in creating a new Christianity that is going to look so different in one hundred years time. So much is up for grabs and we should be trying to get people to re-imagine themselves and their faith. To quote the book again, “We have to be sitting alongside our brother frauds and working out, with their help, and with fear and trembling, what it looks like to be hoiked off into the new Creation.”

Changing Attitude England needs resources not to fight the paper tiger but to achieve real change, taking the infinite love of God to Brighton Pride this Saturday as we did in Leeds last Sunday. To have a stall and march with our banners in a gay pride costs about £250. Please click to join Changing Attitude or make a donation
Posted by Colin Coward at 13:45