Civil Partnerships and Gay Marriage in church - yes, we want it NOW! 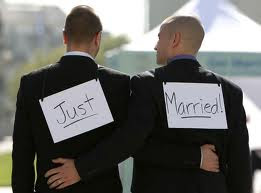 St Valentine’s Day is a good day on which to welcome the leaked news that later this week the government is expected to announce full marriage equality for gays and lesbians under reforms to the marriage law as well as allowing civil partnerships to be held in religious buildings.

Changing Attitude England has been involved in consultations with the government that tested public and LGBT opinion before the decision was made. We will now campaign vigorously for the Church of England to adopt the changes being proposed by the government, open Church of England doors to welcome gay marriages and civil partnerships and grant clergy persons the freedom to preside over and register them.

The Archbishop of York has other ideas. He says he “believes in a liberal democracy, and actually wants equality with everybody,” but the Church of England does not support the introduction of gay marriages or civil partnerships being held in churches. Sadly, Sentamu doesn't want equality for LGBT Christians.

A Church of England spokesman said: “Given the Church’s view on the nature of marriage, the House of Bishops has consistently been clear that the Church of England should not provide services of blessing for those who register civil partnerships.” He said the change will “lead to inconsistencies with civil marriage, have unexplored impacts, and lead to confusion, with a number of difficult and unintended consequences for churches and faiths. Any change could therefore only be brought after proper and careful consideration of all the issues involved, to ensure that the intended freedom for all denominations over these matters is genuinely secured.”

Here’s the arrogant Church of England again, claiming the right to oppose equality legislation and gay marriage in church on the grounds that it is protecting all other denominations.

LGBT Anglicans and our families and friends want this change enacted as much as our friends in the Quakers, Unitarians and in Liberal Judaism. The spokesperson doesn’t speak for us but for a controlling and unrepresentative minority at the centre of church affairs. He doesn’t even speak for the House of Bishops but for their mythic Pastoral Statement on Civil Partnerships, observed as much in the breach.

The argument against change has become untenable in the church. Last week at General Synod I learnt of yet another bishop who has encouraged a priest to contract a civil partnership to provide both him and his partner with the appropriate emotional and legal security that partnerships can provide.

We know what church spokesmen say about the House of Bishops and it’s a fantasy. The House of Bishops is not clear. It is deeply divided and dishonest. It is impossible for bishops to speak the truth to one another. This dishonesty seeps into national church life and affects LGBT Anglicans and clergy. In practice the majority of bishops affirm LGBT people to the extent of knowingly approving blessings and civil partnerships. The rest are still blissfully and dangerously ignorant of the LGBT clergy in their diocese or act dishonestly – the Archbishop of York being a prime example.

I took part in an interview on this morning’s Radio4 Today programme with Rod Thomas, chair of Reform. As one friend commented, I’m not sure he and I were answering the same questions! The card which Reform, Anglican Mainstream, Forward in Faith (home to so many closet gays), and other conservative groups are going to play is the inequality of the proposals.

Rod claims that if a right is given for anything to happen, perverse consequences follow as we are discovering in Europe. I’m not sure what it is that’s happening in Europe that makes Rod so anxious. The crux for him is that the legislation that will have vicars up before the courts. They will have to permit gay weddings and civil partnerships to take place even if they are against it. It’s unfair, you see, as the Bed & Breakfast and Christian Registrar cases show – Christians are now the victims of legal and social change.

Rod then played the numbers card. There were 6000 civil partnerships last year and 250,000 marriages. There are fewer civil partnerships and plenty of places where they can now take place, so why add church buildings as a venue? Why? - because many LGBT Christians want to get married and contract civil partnerships in church, Rod, that’s why. Reform doesn’t represent the whole Christian community. It represents a set of very theologically-minded Christians for whom the Bible is the sole source of authority.

We will have to wait and see how permissive the proposed legislation is when it is published. A Whitehall source told the Sunday Times: “This is not just about gay rights but about religious freedom. Quakers and liberal Judaism want to do this. Attitudes have changed to gay marriage. We are going to look at what legislative steps we could begin to make gay marriage possible.”

Exactly, it’s about religious freedom, and we who are Anglicans and part of the Changing Attitude network want the freedom to celebrate our love and relationships in church – legally and without fear of being judged and condemned.

My guess is that not all churches will be forced to host civil partnership ceremonies under the legislation and individual priests will be free to refuse to conduct such ceremonies, just as they can decline to marry divorced people. But I hope all Church of England buildings will become available for civil partnerships.

The Changing Attitude trustees meet next Saturday in Derby and our campaign for equality, truth and justice in the Church of England for LGBT people will be a major focus of our discussions. To enable us to campaign effectively for change in General Synod and the House of Bishops, please send a donation or become a supporter of Changing Attitude right now!