Archbishop accused of abrogation of responsibility in gay debate 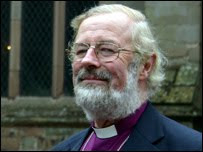 Bishop Peter Selby, patron of Changing Attitude England, delivered a devastating critique of the Anglican Covenant, the Archbishop of Canterbury and, above all, the church’s treatment of lesbian, gay, bisexual and transgender people in a paper he presented to Inclusive Church's residential conference Word on the Street last week. Bishop Peter named thoughts that many in CA have been articulating for some years now.

As he rightly said, for many people, not just LGBT, our situation in the Church is far worse than it was during Archbishop George Carey’s time - and this is something for which the Archbishop needs to own some responsibility. Bishop Peter said he has “a responsibility to acknowledge the distress that is being inflicted on LGBT people by the teaching that is being proclaimed and the characteristic style of the debate.”

Peter Selby makes his comments in the context of criticising the reflections the Archbishop of Canterbury produced following the 2009 General Convention of the Episcopal Church in the USA - Communion, Covenant and our Anglican Future. The Archbishop uses the “I am totally opposed to homophobia, but ...” line of argument at the beginning of the reflections. It is necessary, says our patron, to be honest as well as passionate when making strong denunciations of homophobic behaviour or attitudes of any kind, and the Archbishop is not being honest.

The evidence leaves no room for doubt that homosexuality is the battleground chosen by 'traditionalists' seeking to halt what they see as liberal control of Anglicanism. Homosexuality is the chosen issue precisely because of the visceral responses which it arouses and the energies it allows to be tapped; it provides fuel for the debate. Peter Selby says the Archbishop is complicit in the way that energy is being used despite his personal opposition to homophobia. He does not understand the devastating effect the constant abusive and destructive campaign being waged by conservatives is having. The Archbishop does not name or criticise the dishonesty, bullying and threats that characterise the neo-conservative, radical reformers who style themselves ‘mainstream’ and ‘orthodox’ with such outrageous arrogance that they maintain other Anglicans are not recognisably Christian.

The decisions and actions of numerous provinces, the bullying, the threats, the withdrawal of communion, the unilateral invasions of others' territories – these have all made Anglicanism quite unrecognizable to a significant number of people, says Peter Selby. I think they are making Anglicanism unrecognisable to millions, here in the UK and elsewhere in the Communion.

Peter Selby says he had hoped that the Archbishop of Canetrbury’s giftedness in connecting with people and issues out of a deep and prayerful theological mind might assist all of us, whichever 'side' we were on, to move to a larger perception of this complex reality from which might eventually come a new paradigm of thinking which would change us all. The hope was that he might have united us and helped us us find ways of speaking that do not cause hurt to those LGBT people over whose bodies and lives the church is arguing.

Instead, the Archbishop has come near to “a total abrogation of any attempt to help us to think freshly about sexuality.” Instead, he has taken on an exclusive concern with finding ecclesio-political answers to the current panic. Out of the systemic malaise we inhabit has come an overwhelming false consciousness. Self-preservation as a Communion is the over-riding concern. The Archbishop is depriving us of his ministry of discernment about the issues in dispute.

There is an element of personal choice in the midst of the overwhelming pressure the Archbishop is subjected to. In Christ on Trial, Rowan Williams wrote:

“I long for the Church to be more truly itself, and for me this involves changing its stance on war, sex, investment and many other difficult matters. I believe in all conscience that my questions and my disagreements are all of God. Yet I must also learn to live in and attend to the Church as it is, to do the prosaic things that can be and must be done now and to work at my relations now with the people who will not listen to me or those like me - because what God asks of me is not to live in the ideal future but to live with honesty and attentiveness in the present, i.e. to be at home.”
Christ on Trial, p.85f

Bishop Peter Selby concludes that allowing the 'prosaic things' to condition patterns of thought results in false consciousness and that, it seems is where the Archbishop has arrived.
Posted by Colin Coward at 09:07