Gug has sent me scans of an article printed today in Red Pepper, a tabloid daily newspaper which publishes mostly highly sensationalized stories. The paper was the one used previously to out people. Its owners have connections to the government (it is owned by President’s brother) and it is used by the government to break stories that the other papers will not touch. It is very popular, said to be second only to New Vision, the government owned daily.

Gug has some concern that his jealously guarded anonymity may soon be broken. He is in communication with Pastor Martin Ssempa, the leader of the anti-homosexuality Christian campaign. The conservatives believe that his loss of anonymity will hurt him a great deal, which of course it will. But he thinks it might backfire because once he doesn’t have to hide, he will be free and open to campaign against the Bill in what has become a war, and they may be unpleasantly surprised. He is now more angry and mad than scared, but once exposed he will have more to fear from anonymous other people, those who feel compelled to detest himas an agent of the devil, as Ssempa preaches.

The article from Red Pepper reveals the prejudice against homosexuality which is only too familiar, and the willingness to mix fact with fabrication. If RFSL, the Swedish group named in the report, has indeed poured billions into supporting LGBT Ugandans, then it will be easy to trace, given the transparency of European organizations. Somehow, I doubt that RFSL has sent any money to Uganda, but let’s not worry about such details affecting the truth of LGBT African lives, shall we? 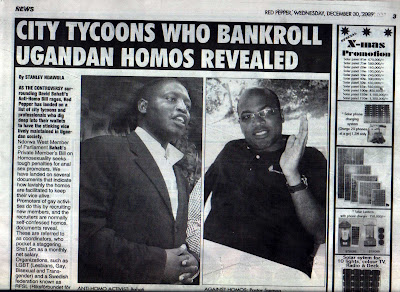 As the controversy surrounding David Bahati’s Anti-Homo Bill rages, Red Pepper has landed on a list of city tycoons and professionals who dig deep into their wallets to have the stinking vice lively maintained in Ugandan society.

Promoters of gay activities do this by recruiting new members, and the recruiters are normally self-confessed homos, documents reveal.

These are referred to as coordinators, who pocket a staggering Shs1.5m [about £12,500] as a monthly net salary. 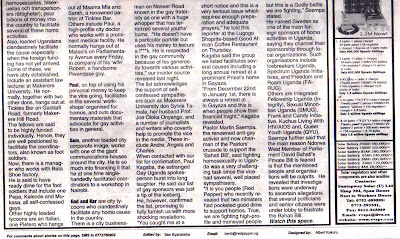 Organisations such as LGBT (Lesbians, Gay, Bisexual and Transgender) and a Swedish federation known as RFSL (Riksforbundet for homosexuaellas, bisexuallas och transpersoners rattigheter), pour billions of money into the country to facilitate several of these homo activities.

Also, loaded Ugandans clandestinely facilitate the cause especially when the foreign funding has not yet arrived. Some of these, we have ably established, include an assistant law lecturer at Makerere University. He normally, together with two other dons, hangs out at Tickles Bar on Gaddafi Road, formerly Makerere Hill Road.

The fellows are said to be highly funded individually. Hence, they are well position to facilitate the coordinators, also known as foot soldiers.

Now, there is a manager who works with Bata Shoe factory. He is said to have ready dime for the foot soldiers that include one Pepe, Kalende and Mukasa, all self-confessed gays.

Other highly loaded tycoons are an Italian, one Pietero who hangs out at Maama Mia and Sarah, a renowned patron at Tickles Bar. Others include Paul, a high-profile city doctor who works with a prominent medical facility. He normally hangs out T Mateo’s on Parliamentary Avenue every Friday, in company of his ‘wife’, Robert, a handsome Rwandese guy.

Paul, on top of using his personal money to keep the vice going, facilitates in the several ‘workshops’ organised for homos, and outs documentary materials that advocate for gay activities in general.

Sam, another loaded city corporate image, works with one of the giant communications houses around the city. He is so much into financing it that he at one time single handedly facilitated coordinators to a workshop in Nairobi.

God and Kar are city tycoons who clandestinely facilitate any homo cause in the country.

There is a city businessman on Nasser Road known in the gay fraternity as one with a huge whopper that has terrorised several youths’ bums. “He doesn’t have a particular partner but uses his money to secure a f**k. He is respected in the gay community because of his generosity towards various activities,” our insider source revealed last night.

The list acknowledges the support of self-confessed sympathisers such as Makerere University don Sylvia Tamale, her husband Prof. Joe Oloka Onyango, and a number of journalists and writers who covertly help to promote the vice in the media. These include Andre, Angela and Charles.

When contacted with our list for confirmation, Paul Kagaba, the estranged Gay Uganda spokesperson burst into long laughter. He said our list of gay sponsors was just the tip of the iceberg.

He, however, confirmed the list, promising to fully furnish us with more shocking revelations. “You caught me at a short notice and this is a very serious issue which requires enough preparation and adequate prayers,” he told this reporter at the Lugogo Shoprite-based Good African Coffee Restaurant on Thursday.

Kagaba said the group we listed facilitates several causes including a long annual retreat at a prominent Priest’s home in Gayaza.

“From December 22nd to January 1st, there is always a retreat at .... in Gayaza and this is when people show their financial might,” Kagaba revealed.

Pastor Martin Ssempa, the renowned anti-gay activist and now chairman of the Pastors’ crusade to support the ‘Bahati Bill’, said fighting homosexuality in Uganda was a very challenging task since the vice had several, well placed sympathisers.

“It is you people (Red Pepper) who recently revealed that two ministers had pocketed giood dime to support homos. True, we are fighting a high-profile and moneyed people but this is a Godly battle we are fighting,” Ssempa stated.

He named Sweden as one of the main foreign sponsors of homo activities in Uganda, saying they channel their sponsorship through local organisations. Such organisations include Icebreakers Uganda, Spectrum Uganda Initiatives, and Freedom and Roam Uganda (FARUG).

Others are Integrated Fellowship Uganda (Integrity), Sexual Minorities Uganda (SMUG), Frank and Candy Initiative, Kuchus Living With HIV/AIDS and, Queer Youth Uganda (QYU). Ssempa further said that the main reason Ndorwa West Member of Parliament David Bahati’s Private Bill is feared is that the mentioned people and organisations will be culprits. He revealed that investigations were underway to ascertain allegations that several politicians and senior citizens were under lobby to frustrate the Bahati Bill.
Watch this space.
Posted by Colin Coward at 16:53