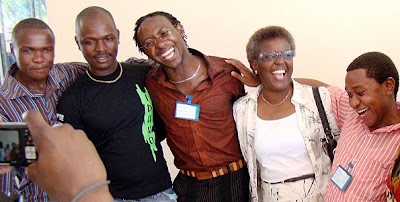 The Revd Michael Kimindu, Changing Attitude’s contact person in Kenya, has alerted me to pro-gay comments made by a Kenyan Government Minister. Special Programmes Minister Esther Murugi (second from right in the photo taken at the symposium) told participants at a national symposium on HIV/Aids held last Thursday in Mombasa which targetted homosexuals, lesbians and sex workers that the government had no option but to address the community’s concerns.

She asked Kenyans to accept prostitutes and homosexuals as part of the society. "We have to accept people the way they are and embrace them in the society. We need to learn to live with men who have sex with other men… we are in the 21st century and things have changed,” she told the symposium. Ms Murugi said the group was an independent constituency and should not be stigmatised because of sexual inclination.

Michael is clearly excited by this development and told me that the minister is on their side in recommending acceptance of lesbian and gay people, embracing them in society and allowing them to marry. He met 5 Anglicans, all from the same congregation, at a gathering of LGBT people on 25th September. They promised to introduce Michael to many other lesbian and gay Anglicans and he says that there is evident interest in becoming involved with Changing Attitude.

Churches condemn the Minister’s remarks
The Federation of Evangelical Indigenous Christian Churches of Kenya (FEICCK) representing more than 74 churches petitioned the President Mwai Kibaki to sack the Cabinet Minister over her remarks. FEICCK chairman Bishop Dr Joseph Methu said: “This should happen in the shortest time possible; failure to which we shall not be left with any other option other than to ask those who care about righteousness and morality to demonstrate against her.“

Ms Murugi discredited her reputation and was unfit to hold public office, he said, warning of street demonstrations. Dr Methu stressed that unless intended to invite God’s wrath, Kenyans should not dare to allow homosexuality and lesbianism to thrive in the country.

“God will punish all forms of immorality despite who is promoting it and at whatever level. We have observed Hon Murugi Transforming herself to becoming a trouble shooter and one who makes statements focused on demeaning and antagonizing the faith community in Kenya“ he told the Nation. He said the faith community in Kenya respects the rights of all persons but will oppose all forms of propagation of ungodliness and immorality.

Moslem reaction
The organising secretary of the Council of Imams and Preachers of Kenya, Sheikh Mohammed Khalifa, said the utterances were “satanic and contrary to Africa culture”. “God in his holy books (Quran and Bible) cursed homosexuality and directed us to fight it. The minister has offended Kenyans who passed a new constitution that criminalises the vice,” he said.

Support for Changing Attitude's developing work in Kenya is urgently needed. Please consider joining as a supporter or make a donation for Michael Kimindu's pioneering work in Kenya
Posted by Colin Coward at 14:31