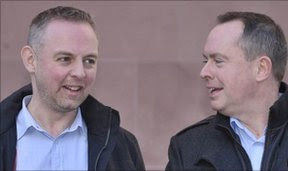 At Bristol County Court, Judge Rutherford has ruled that the Christian owners of a hotel who refused to allow a gay couple a double room acted unlawfully. He said that, in the past 50 years, social attitudes in Britain had changed and it was inevitable that laws would "cut across" some people's beliefs. He awarded each of them £1,800 each in damages. He said:

"It is a very clear example of how social attitudes have changed over the years for it is not so very long ago that these beliefs of the defendants would have been those accepted as normal by society at large. Now it is the other way around."

The Bull’s, owners of he hotel, discriminated not only against lesbian and gay couples but against heterosexual couples who chose not to marry but live as a couple. If they had refused a heterosexual couple a double room, would the couple also have won a case of discrimination? How many hotels and B&B’s are there in the UK which would refuse to let unmarried straight couples occupy a double room?

The last 10 years have seen a transformation in social attitudes to LGBT people as the judge said. Views that were normal a decade or two ago are now seen as unacceptable and illegal. One of the places where such prejudice is still acceptable is in certain areas of some Christian denominations.

The Christian Institute and Anglican Mainstream will claim that such views are not prejudiced, are held with integrity, and are what all Christians believe. They are wrong. Most Christians in the UK have overcome their prejudice about same-sex relationships. It is a minority who are holding the Church of England (in particular) to ransom. General Synod and the House of Bishops are constrained by the undue influence of conservative lobby groups and the strongly held views of a small number of leaders elsewhere in the Communion. They are doing untold to damage to Christian witness and ministry in this country.

UK social attitudes towards LGBT people have changed dramatically in my lifetime, and the attitudes of the majority of Christians have changed as well. Their faith is not determined by a fundamentalist or literal reading of the Bible but by a relationship with God which is nurtured by an experience of love, truth and justice.

Will the Church learn anything from this judgement? I hope to God the answer is yes, but sadly, I think business will continue as usual. The Christian Institute will maintain that Christians are being subjected to discrimination. So am I, a gay Christian man, along with many of my friends.

The institutional Church will continue to allow itself to be intimidated by those holding what they claim are traditional Christian views which enable them to maintain a culture of prejudice, dishonesty, abuse and corruption in the Church. It’s time for change, bishops and Archbishops and members of General Synod. You are out of touch with the majority of people in this country, with the majority of Christians and with people’s awareness of God. People know the church is peddling a lie about God. That’s why they’ve deserted the Church in droves. God is about the outrageous, creative, infinite possibilities of holy love, not about policing adult sleeping arrangements in a Cornish hotel.

Please support our work to overcome prejudice and discrimination in the Church by becoming a supporter of Changing Attitude or sending a donation.
Posted by Colin Coward at 12:41