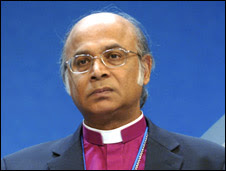 Bishop Michael Nazir of Rochester was one of the speakers at the recent Mere Anglican Conference in Charleston, South Carolina.

Bishop Michael has clear opinions:
· the instruments of unity have failed the Anglican Communion
· he singles out the Lambeth Conference as the worst offender

Bishop Michael said the Windsor Report specifically asked that those who participated in the ordination and consecration of Bishop Gene Robinson not be present at Anglican meetings.

"Despite this, they were invited to the Anglican Consultative Council meeting and they were the dominant presence. They were then invited to the Lambeth Conference. I asked why were they invited. I have not ever been given a satisfactory response. My concern is about those who laid hands on him. I am being responsible in asking that question. Of course I am willing to sit with people who differ. I have attended two Lambeth conferences, 1988 and 1998. It would have been my third conference. However (in conscience) I could not be present."

It was the Archbishop of Canterbury who invited the Episcopal Church bishops who participated in the consecration of Gene Robinson to the Lambeth Conference. Bishop Michael’s remarks are a direct criticism of Dr Williams and seek to undermine his authority. By his presence in Charleston Bishop Michael further challenges the integrity of the Anglican Communion by associating himself with those who are attempting to create a rival Province.

Bishop Michael was one of six bishops (the others being Blackburn, Chester, Chichester, Exeter and Winchester) who wrote in support of the Bishop of Pittsburgh in September 2008. Writing in Times Online, Ruth Gledhill said the bishops were "deeply saddened and shocked" by Bob Duncan’s deposition. In an interview the Bishop of Rochester said the time had now come for Dr Williams to create a new province for conservatives in the US.

At the time, Changing Attitude feared that all six bishops were set on undermining the authority of the Archbishop of Canterbury and the Instruments of Communion. Michael Nazir-Ali’s speech in Charleston confirms our suspicion. We worry that support for Bob Duncan and the creation of a new Church with the aim of replacing TEC in the Communion will be replicated in England. Those opposed to women bishops and gays in the church would like a women-priest-and-gay-free alternative CofE.

Changing Attitude doesn’t. We are fully committed to the authority of the Archbishop of Canterbury and the Instruments of Communion, even though we are working for a radical change of church policy. We will be in Alexandria next week to show our commitment and argue our case.
Posted by Colin Coward at 11:34