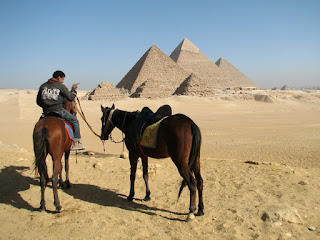 I arrived in Alexandria with Brenda Harrison by train from Cairo this morning, after sightseeing on Saturday. We visited the pyramids at Giza, me on horseback, Brenda on a camel.

We moved on after 3 hours hard riding south to the stepped pyramid, the first to have been built in 2650BCE. Sandstorms swept across during the visit making the experience less than ideal. Here by the sea, the sea and sky are both crystal clear blue. We hope this is a good omen for the Primates meeting, blue skies and clear thinking. 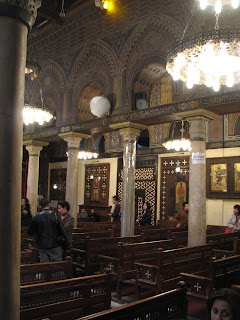 We returned to Cairo, to the Coptic quarter, where there are a number of Coptic churches, one proclaiming to be one of the places where Mary, Joseph and Jesus stayed on their escape to Egypt.

In the departure lounge at Heathrow we met Carlos Touche Porter, the Presiding Bishop of the Anglican Church of Mexico and David Craig and Christine Codner, both members of staff at the Anglican Communion office. There is a service at the Pro-cathedral at 6.30pm followed by a photo-call.

I have applied for press accreditation but not received a response. Brenda and I sat and wondered who from the British press might be present, but couldn’t think of any. It seems unlikely that any American journalists will think the meeting worth covering, and I doubt it will have the same interest for local journalists as the last meeting in Tanzania.

My assumption is that many of our friends from the conservative pressure groups will be here. We are here from Changing Attitude to pray for the Primates, to remind them that there are many lesbian, gay, bisexual and transgender Anglicans in every Province of our Communion, and our presence should be recognised and respected.
Posted by Colin Coward at 20:34