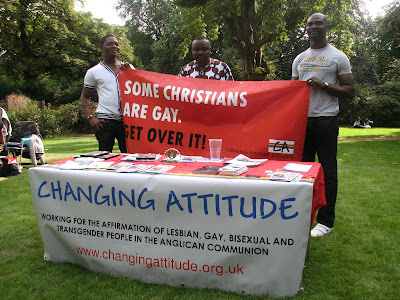 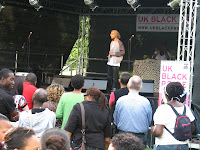 Members of Changing Attitude Black Caucus staffed a stall at UK Black Pride yesterday in the grounds of Regent College, Regents Park in London. The stalls were spread around the leafy grounds of the college with a sound stage at the far end, a disco tent, bar and food stall and workshops to keep the punters entertained. MCC East London were well represented and the Soka Gakkai Buddhist Network had a stall. Stonewall and Imaan Muslim Support Group were among the 30 organisations present. 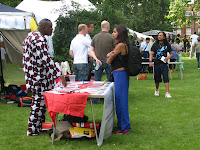 On the CA stall, Davis, myself and others were engaged in conversations from 12noon when the event opened to 7pm when we finally packed up, some to go home, others to dance and party. People expressed a real interest in the work of CA, both in Nigeria and also among people of African descent and black people generally. African, American, Caribbean and UK-born, all were present.

I was delighted to reconnect with members of our team from the Lambeth Conference just over 12 months ago. Mia, the transgender Buddhist Nigerian who was a member of the panel for the African Witness seminar was there as was Chris who joined us for one day at Lambeth. 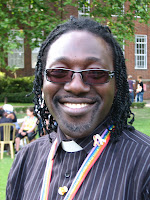 I hadn’t met Jide Macaulay since he had left London to set up the House of Rainbow MCC Church in Lagos. He returned to safety in London after the church gained more publicity than was safe and came under attack in the media. Jide and the congregation were physically threatened and pursued and it became impossible for worship meetings to continue. It was good to learn at first hand from Jide, especially of the relationship with his father, a senior Christian pastor in Nigeria who was portrayed publicly as being hostile but who is in truth accepting of Jide’s sexuality. 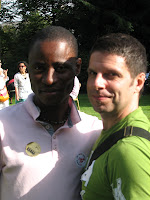 I met Bisi Alimi (left, with his partmer) for the first time, the only person ever to have come out at gay on Nigerian television. Bisi is a man of great courage who has been granted asylum in the UK and continues to work in exile for a changed reality for lesbian, gay, bisexual and transgender people in Nigeria, as do Davis and Jide. None of them expect to be able to return to Nigeria in the next 5 or even 10 years. They will continue to live estranged from their home country, their families and friends.

There is a generation of LGBT people in Africa, many Christian, many Anglican, who the Church is failing and who feel abandoned by the mainstream Churches. Before change happens, a second generation, if not a third, will have become even more estranged from their Christian roots. The Anglican Communion now has sufficient first hand evidence to know that LGBT people exist in Africa and are subject to prejudice and violence, living under punitive ex-Colonial legal systems. LGBT Africans are being failed by the Church.

I have tried to digest the swirling thoughts and feelings I experienced as I engaged in many different conversations yesterday. Nearly all the time and energy of the Anglican Communion is being absorbed by the campaign being waged by conservative networks wgi want to force the Church into schism on the pretext of the consecration of a bishop who lives with his gay partner.

The Church of Jesus Christ, friend of sinners and outcasts, the imprisoned and vilified, should be pouring its time and energy into making the Church a just and safe place for all, LGBT people included.

The networks across the Communion working for peace and justice, of which CA is a part, have been slow to wake up to the need to work directly and passionately for all of God’s people. The Episcopal and Canadian Churches have led the way for LGBT people, but all of us have been pushed into a defensive position, reacting to the sustained campaign waged against us by conservatives. 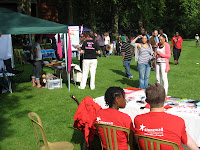 Now is the time to wake from sleep, regain confidence in the Gospel of peace, justice and truth and work for change for all of God’s people across the whole Communion. Many never lost confidence, of course, but we have been distracted. It is time to work together for the change in attitudes we know to be holy and right to create a Communion in which women, black people, LGBT people, all, all, all, all, in Desmond Tutu’s powerful sermon – ALL have a place.
Posted by Colin Coward at 09:53