The dangerous Bishop of Durham – part 1 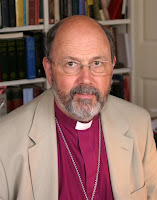 The Bishop of Durham’s paper claiming to ‘unpack’ the Archbishop of Canterbury’s Reflections is dangerous for the Church of England, for LGBT people and for the worldwide Anglican Communion. People in the Changing Attitude network, gay and straight, are furious at his abuse and dishonesty. The paper reveals a bishop with a megalomaniacal drive to impose his own solution unilaterally on the Communion.

Durham would like The Episcopal Church and partnered LGBT people evicted from the Communion right now. His stand is unprincipled. The bishop has partnered lesbian and gay clergy in his own diocese and knows full well that there are many partnered clergy in the Church of England. Instead of addressing what he says is the impossibility of the church recognising same-sex blessings, he diverts attention away from home and focuses his attack on The Episcopal Church.

Interfering with The Episcopal Church
The Bishop of Durham sets out to exacerbate divisions within The Episcopal Church. Whereas the Archbishop of Canterbury writes of ‘the broken bridges into the life of other Anglican Provinces’, Durham claims that the Archbishop ‘rightly’ indicates that ‘the Communion is already broken’. TEC is not choosing to walk apart now but did so some time ago, he declares. ‘Schism has already happened’ (Para. 13 iii). The Bishop of Durham has joined those conservative pressure groups that have been campaigning for some years to evict The Episcopal Church from the Anglican Communion. They misuse language and construct their own reality in pursuing their goal.

Durham slides statements which have no basis in reality into his argument against The Episcopal Church by stealth. In paragraph 4 he writes of ‘the theology which underlies the Communion’s constant and off-repeated stance on sexual behaviour’. The Communion as a whole does not have a systematic theology of sexual behaviour as far as I am aware. Neither does the Communion have a united, constant and oft-repeated stance. The Episcopal Church is not the only Province which dissents in whole or in part from Lambeth 1.10.

The bishop claims that prior to 1998 the church universally held a traditional stance on same-sex blessings and the ordination of non-celibate homosexuals. The bishop was ordained into a church which ordained closeted, partnered gay men. Resolutions at Lambeth 1978 and 1988 asking for the church to undertake a study of homosexuality did so because the church accepted that questions were being raised to which it did not have answers.

The official position of the whole of the Anglican Communion has not been repeated again and again by Lambeth Conferences, ACC and Primates as Durham claims. The resolutions of Lambeth 1978 and 1988 demonstrate that this is totally untrue. I doubt that any Lambeth Conference, ACC or Primates meeting prior to 1998 took a position on homosexuality. Such blatant distortion of the truth from a bishop who claims to be the interpreter of truth for the Archbishop of Canterbury and the Anglican Communion renders him deeply dangerous to the Communion and to LGBT Anglicans.

Timing
The Bishop of Durham wants to short-circuit the Archbishop’s timetable. He wants a decision about who is in and out of the Communion to be made NOW, not postponed until the end of 2009 when Section 4 of the Covenant is finalised (para 19). ‘We do not need to wait until Section 4 is redrafted’ (Para 21(iii)). Interim structures are needed ‘now, not in six months, let alone six years’ (para. 21(iv)). The Archbishop of Canterbury should move unilaterally and ‘swiftly to implement what he himself has said’, ‘counting on support from bishops around his own Province’ (para 20).

Durham proposes using the Anaheim Statement as a rallying point for TEC dissidents. Signing Anaheim and Sections 1-3 of the Covenant could function as a ‘prerequisite for participation’ in representative Anglican functions and bodies. He wants to do away in one move, now, with the ACC, Primates Meeting and Lambeth Conference as at present constituted, ending TEC participation in the Instruments of Communion and all other bodies constituted under their auspices.

The Bishop knows that the English bishops do not fully support the policies that Durham, York, Canterbury, London and Winchester want to impose. They were defeated in the vote taken at the July 2008 York Synod on women bishops. Durham knows bishops can’t be counted on to support speedy action designed to punish The Episcopal Church, action which will also have a negative impact on LGBT clergy in England. He enlists as allies in this unsubtle move, ‘the whole Christian tradition’, ‘the real heart of all authority within the body of Christ’, and ‘the genuine apostolic authority of the word of God and prayer’, as Canterbury ‘has himself insisted’. This is a transparent attempt to enlist the heavy guns and bind the Archbishop of Canterbury to Durham’s own agenda.

He claims: ‘These are only suggestions, designed to help those on the ground’. They are nothing of the sort, but rather very concrete and dogmatic proposals designed to pressurise the Archbishop of Canterbury into taking action of which Durham approves and which short-circuits the Archbishop’s own careful (but ultimately misguided) strategy.