Spiritual Fruits, Not Religious Nuts was the title of one of the large display boards welcoming people to a barge in Canal Street Manchester today, the heart of the city's gay quarter. 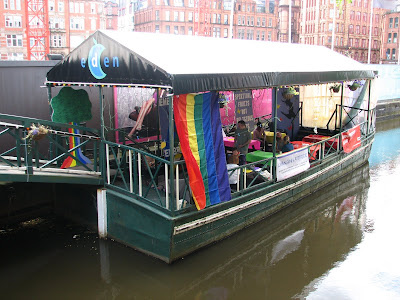 In preparation for Manchester Gay Pride which begins in earnest tomorrow evening, volunteers from LGBT-friendly faith communities from across the North West, including Anglicans, Quakers, Catholics, Unitarians, Evangelicals and at least one Jew hosted a sacred space on the Eden Barge moored outside the Eden Bar in Canal Street. The Changing Attitude supporters taking part included supporters from Manchester and Liverpool groups. 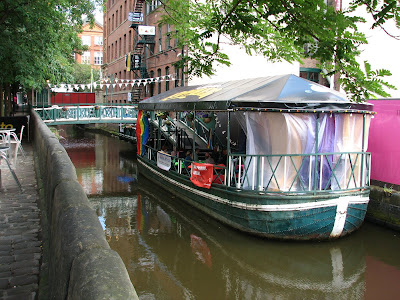 The barge was decorated by the volunteers and included areas dedicated to meditation, reflection, creativity and prayer with volunteers on hand all day for visitors to talk with. The contemplative space at the prow of the barge was enclosed by white, gold and green gauze. The Changing Attitude banners were prominently displayed facing Canal Street and the latest edition of Forward Thinking was available. 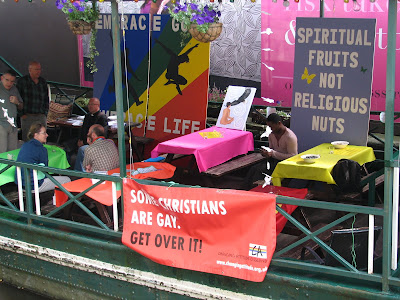 The space aimed to show that it is possible to achieve a healthy integration of sexuality and spirituality, and to showcase the work of LGBT-friendly faith groups. 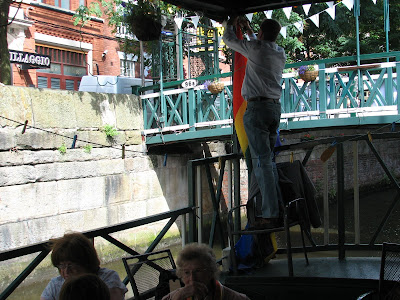 The Sacred Space will be on the move in the Manchester Pride Parade on Saturday through the city centre with a float and walking group representing the faith communities taking part.
Posted by Colin Coward at 22:32