On Monday a group of activists from various organizations in Uganda delivered a petition to the Speaker of Parliament, Edward Sekandi, protesting against the Anti-Homosexuality Bill. The online petition, organised by the campaign group Avaaz, has been signed by over 450,000 people worldwide. Eventually they hope to reach one million signatures. The petition calls on the government of Uganda to withdraw the Anti-Homosexual Bill and to protect the universal human rights embodied in the Ugandan constitution. 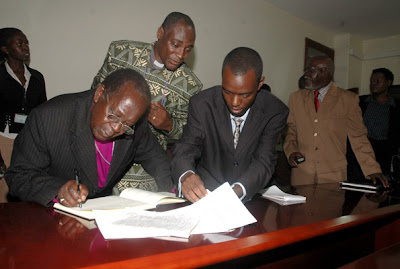 The petitioners included bishop Christopher Senyonjo from Integrity Uganda, Canon Gideon Byamugisha , an Anglican priest, the HIV/AIDS activist Rubaramira Ruranga and Noerine Kaleeba from TASO. Gug’s partner was there, being one of the people organizing the presentation. Gug had predicted that a surprise person, a Prince of the Church, would be there, but they didn’t turn up.

A letter accompanying the petition read: "This is a bill that requires various members of community, family members, service providers and spiritual mentors to "spy" on one another." Those who delivered the petition could face jail for failing to inform the authorities if somebody confided their homosexual activities to them. They say the bill does not protect Ugandan cultural practices as it violates traditions that teach against intolerance, injustice, hatred and violence. In particular they oppose the clause that requires family and community members to report people suspected to be gays, which they say could be used for a political and religious witch-hunt. They are asking Parliament to instead enact laws that will protect people and not humiliate or kill them.

The BBC East Africa correspondent Will Ross said the fact that the vast majority of the signatures were from outside Uganda is significant, as the MPs would be more likely to take notice of Ugandan rather than international opposition to the bill.

The government has indicated it expects the final bill to be amended eliminating the more extreme proposals. However, it is a private member's bill and so the government says it cannot directly intervene before parliament votes on it.

To add your signature to the petition go the Avaaz web site.
Posted by Colin Coward at 09:14