Changing attitudes in Africa in 2011 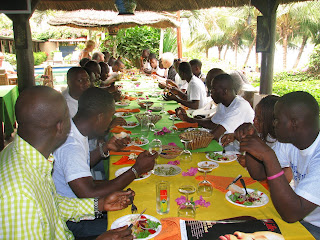 Changing Attitude has a small foothold, a presence, in three African countries. In Nigeria, Uche was appointed Director earlier this year to succeed Davis Mac-Iyalla. He is working with a small group to reactivate the local groups and plan for change in 2011. In Kenya, Michael Kimindu is making connections with bishops and with groups like the Mother’s Union in dioceses, inviting them to listen to LGBT Kenyans. The group around him in Nairobi continue to meet for worship. In Ghana, Richard is leading a group of gay Christians who meet twice a week in Accra, encouraging them to be confident in their faith and their commitment to Christ and the church as gay Christians.

These are small beginnings in a huge continent where attitudes to human sexuality are beset by prejudice, hostility and unexamined beliefs. British colonial law and C19th theology and Christian teaching are the foundation underlying African attitudes to homosexuality.

The search for love
The rapid spread of mobile phones and access to the internet across Africa in the last decade is transforming the awareness of LGBT people, most of whom are under 30. Ten years ago, young gay Africans began to discover gay dating sites such as gaydar and manjam. Many still access these sites but are repeatedly disappointed by their failure to meet the man of their dreams. What they repeatedly tell me is that all the other guys want is sex, revealing that what many also seek is love, a relationship, commitment, someone who will take them and respect them. These are elusive ideals in reality for LGBT Africans.

Facebook
Their frustration and inability to connect with others who share their desire to meet a life partner has begun to change, however, in the last two years, thanks to Facebook. There are now thousands of LGBT Nigerians and tens of thousands of LGBT Africans with profiles on Facebook. They are increasingly confident in indicating their sexuality on their profiles – ‘interested in men and women, relationship status complicated’.

Young LGBT Africans are becoming more confident, posting pictures of their real selves (though many, to protect themselves, still post pictures from dating sites, or of gay icons, or avoid pictures altogether). The more adventurous and confident post pictures taken with gay friends or a partner or of themselves in camp poses. It has become much easier for those with internet access and a Facebook profile to meet other LGBT people in their locality, in safety online and with greater safety face to face (blackmail is a common feature on gay dating sites).

Loving relationships become a reality
The result of this access to real people, online, who can get to know as you chat with them in real time, watch them on a web cam, and then arrange to meet for a date is that the loving relationships that young gay Africans have dreamed of are becoming a reality in their lives – potentially permanent, faithful, stable, loving relationships. Older generations complied with powerful social and family obligations by marrying and having children while discretely having a same-sex lover as an adjunct to the marriage. The new generation is not following the same, dishonest, damaging path.

They have access to information about gay rights in the west, marriage equality, civil partnerships and the undreamt of levels of freedom we enjoy in society if not yet in our churches. They long for the freedom we enjoy to live openly and inevitably, many of them dream of escaping to the west because change in the entrenched African culture of intense prejudice and violence against LGBT people seems an impossible dream.

Despite that, some Nigerians are reporting a growth of tolerance in some parts of Nigerian society and the opening of social space where LGBT people have more freedom to reveal their identity. But the huge majority remain hidden, meeting other LGBT people clandestinely.

The desperate need for change
Tens of thousands of LGBT Africans are desperate for change. Africa is sitting on a hidden reality, millions of LGBT people, with a growing confidence in their identity, engaging with each other online and their networks of friends, but hidden from their families, school mates, straight friends, and of course, in their churches. African bishops, priests and congregations have no idea how many LGBT people worship alongside them every Sunday.

Change has to happen and will happen, but how, and when? This is the question I am raising with the leaders in Ghana, Kenya and Nigeria and with other African LGBT leaders for whom the question and the challenge is becoming increasingly insistent.

To enable Changing Attitude’s work across the Communion to be developed and help provide modest resources to our African brothers and sisters, please make a donation or become a supporter of Changing Attitude England.