Anglican-Information – which calls itself ‘a voice for the voiceless’ in the Anglican Central African Province - issued e-letters this week revealing that the acting Dean of the Province, the Rt Rev’d Albert Chama (pictured below left) has flown to the Fourth Global South Encounter in Singapore accompanied by Bishops William Mchamba of Eastern Zambia and Godfrey Tawonzvi of Masvingo, Zimbabwe together with Fr Christopher Mwawa formerly Dean of the College of Christian Ministries, Diocese of Lake Malawi.

Currently, the clergy of Zimbabwe and Lake Malawi are unpaid, surviving by scratching a living from their smallholdings. The cost of the first class flights and accommodation for the four attending the Global South-South Encounter in Singapore roughly equals a whole year’s pay for the unpaid clergy of the Province. It is not clear where the finance for their attendance in Singapore has come from but Anglican Information assumes it is from conservative, schismatic North American Anglicans. Dismay and anger are now being expressed against the acting Dean for such a profligate waste of money.

Yesterday, a letter issued by the Diocesan Secretary of the Diocese of Lake Malawi announced a change in date for the consecration and enthronement of the Venerable Francis Kaulanda as the next Bishop of Lake Malawi. Originally scheduled to take place on Sunday 2nd May it has now been postponed to Sunday 9th May ‘in order to accommodate as many Provincial Bishops as possible’ says the letter. The real reason is the absence of the acting Dean of the Province and other bishops who have flown to Singapore.

Shockingly, the letter repeats a request for desperately needed funds for the Diocese. Donations tend to come largely from the UK and the USA, the very churches which the Global South Conference has been called to condemn. Donors are likely to think twice this time. As Anglican Information puts it, those attending the South-South Encounter “… are currently pursuing a fissiparous agenda in their battle against the American Episcopal Church and a disruptive and schismatic programme in the Anglican Communion.” 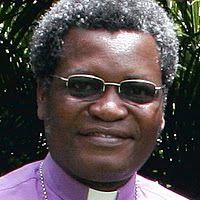 As I reported, Ian Earnest, the Archbishop of the Indian Ocean and a key member of the Global South-South Encounter, wrote to the Archbishop of Canterbury on 13th April insisting that at further meetings of Anglican Primates the North Americans should specifically not be invited. His presence combined with Albert Chama’s attendance affects Bishop James Tengatenga (pictured right) of the Diocese of Southern Malawi. Bishop James was elected chairperson of the Anglican Consultative Council at the Jamaica meeting last year. The ACC has, of course, been severely criticised by the Global South. Bishop James, whom I have met on several occasions, is currently on sabbatical study leave in the United States with the Episcopal Church.

Bishop Trevor Mwamba of Botswana and Bishop Chad Gandiya of Harare also have reason to feel aggrieved with Chama’s actions because they have been closely associated with the North American Churches and have remained loyal to Canterbury.

It is not clear where Albert Chama’s authority to attend on behalf of the Central African Province has come from. He has neither the approval of the Provincial synod nor the support of the other bishops. By attending the Conference in Singapore he allows the Province to be counted as supportive of the schismatic movement, when this is clearly not the case.

The scenario in the Central African Province reveals the divisions which in truth underlie the false claims to represent a unified majority in the Anglican Communion made by the Global South leaders.