Yesterday’s lectionary readings from Deuteronomy 6 and Ephesians 2 set off a train of thought in me.

Deuteronomy gives substantial support (for those who give equal weight and authority to the whole of the Bible) to those who claim to be orthodox, conservative and evangelical in their commitment to a God of rules who wields power and authority. God has commanded Moses to teach the Israelites all the commandments, statutes and laws so that they may “fear the LORD your God and keep all his statutes and commandments.” (Deut 6.2) If they go after other Gods, “...the anger of the LORD your God who is among you will be roused against you, and he will sweep you off the face of the earth ...” (Deut 6.15) “The LORD commanded us to observe all these statutes and to fear the LORD our God...” (Deut 6.24) God commands obedience to law and is to be feared. 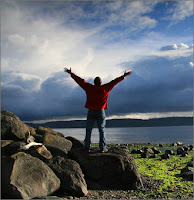 Paul on the other hand, writing to the church in Ephesus, reiterates again and again that it is by grace that we are saved (Eph 1.7, 2.5, 2.8), grace has immense resources (Eph 2.7). God has lavished on us all wisdom and insight (Eph 1.8) that we may know “how rich and glorious is the share he offers you among his people in their inheritance...” (Eph 1.18) and has raised us up “...so that he might display in the ages to come how immense are the resources of his grace...” (Eph 2.7) because “...we are God’s handiwork, created in Christ Jesus for the life of good deeds which God has designed for us.” (Eph 2.10)

Now, if you are a Global South Anglican, the teaching of Deuteronomy is as much your guide as is Paul, and you can use Leviticus 18.22 to condemn LGBT people. It will be clear to Global South Anglicans that the grace and gifts lavished by God and described by Paul in Epehsians cannot apply to loving, partnered LGBT people. I, partnered, gay Colin Coward, am mistaken in my experience of the lavishness of God’s grace and God’s gifts and blessings on my life – not so?????

How has this state of affairs arisen? How can the Revd Dr Paul Swarup in the third thematic address in Singapore say that we can only be a light to the nations by following God’s instruction and pursuing justice and encouraged the Encounter delegates to pursue justice by calling people to be accountable, speak the truth in love and expose what is not of the Lord, which means, of course, exposing TEC, Mary Glasspool, Gene Robinson and all the faithfully partnered Christians in the Communion?

Let me float a theory. The ‘west’ - Britain in the case of Anglicanism - exported the Empire Brand, Colonialism, a system of power and control (and rape of other world resources) by ‘us’ over ‘them’ for our white, British benefit. The British integrated a version of Christianity into the British Empire Brand, modelled on Victorian colonial values and norms – hence, obedience to the Ten Commandments, to authority, to the teaching of law, not grace, and submission to the rule of God and the Queen, both symbols of supreme autocratic power. This model continues to work well for some authority figures in Africa, those who enjoy holding, wielding and abusing power and authority.

Meanwhile, many Anglicans follow an entirely different Christian model which bears little relationship to the brand exported to the colonies. The Colonial brand continues to achieve surprising success in various parts of the world, but would be the kiss of death for the UK and, in its extreme form, in the USA also.

What can we do about this dire state of affairs in which what I believe to be a largely misguided, old-paradigm, Empire Brand Christianity has become dominant and is accepted by the majority of adherents as historically orthodox and congruent with the teaching of Jesus? The answer to this question is what I am daily trying to work out as I live into my faith. I remember core truths - I remember that God is the loving creative energy at the heart of the universe, not Global South Primates and leaders. They have their place in the witness to Jesus Christ, but it isn’t at the centre controlling the destiny of all, which is where they are trying to place themselves this week in Singapore.