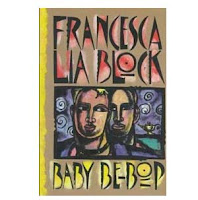 A small story from the USA which has made it onto Pink News today. It’s about a book on display in West Bend Community Library in Wisconsin, USA. A group of men who have given themselves the title Christian Civil Liberties Union has filed a lawsuit demanding the right to publicly burn the book, Francesca Lia Block's Baby Be-Bop.

The group of elderly men claim their mental and emotional well-being was damaged by the book, saying it constitutes a hate crime and that it degrades the community. They have described the book as "explicitly vulgar, racial [sic], and anti-Christian". They say the use of the word ‘nigger’ could "put one's life in possible jeopardy" and the word 'faggot' is very derogatory and slanderous to all males.

Francesca Lia Block, the author, said that she had intended to “expose racism and homophobia, not promote it" by including the offensive words. Her brother works on a hotline for gay youth and she said that: “every night he's talking people down from suicide because they're gay and they're not accepted by the communities they're in."

These men are at the crazy extreme end of the conservative Christian campaign against all things LGBT. It's not something that is likely to happen in the UK – I hope. But these elderly men say the book is anti-Christian and claim their mental and emotional health is being damaged by it. Of course, they didn’t have to pick it up and read it if they thought it might be damaging. But until you’ve read something for yourself, you’re reliant on other people’s views and can’t make a personal assessment.

It connects with the campaign going on here to change Clause 61 in the Coroners and Justice Bill. The Christian Legal Centre want the government to change Clause 61. They think it will prevent any Christian “openly stating a conservative reading of the Bible’s views on homosexual practice.”

A conservative view on homosexual practice expressed in the work place would be illegal under the bill – indeed, is illegal at the moment – Clause 61 is clarifying the intent of the previous bill.

Conservative Christians in this country want the freedom to express homophobic teaching and attitudes toward LGBT people in the work place because they are found in the Bible. Conservative elderly male Christians in the USA want to publicly burn a book which offers help to young gay men struggling to come to terms with their sexuality.

The prejudice against which young gay men struggle in the USA and UK is inflicted by groups such as the Christian Legal Centre who want the freedom to preach what amounts to the way God hates gays – faggots, as the book and Pastor Fred Phelps, another poisonous influence, puts it.
Posted by Colin Coward at 09:17