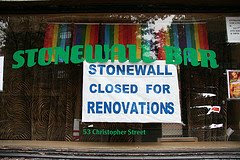 Writing of the police raids that led to the Stonewall riots that marked the dramatic beginning of Gay Liberation in the United States, Colin recalled that “it was the drag queens who led the resistance”. Indeed it was, and looking back at that event in the light of the consolidation of transgender identity during the past four decades, Trans people have begun to ask the question, ‘were those drag queens the precursors of those who nowadays would identify as the T in LGBT, rather than as Gay?’

This sort of question is often asked about ‘our history’ as LGBT people, whether it be ancient history or more recent times. Gay historians look at certain behaviours in an earlier culture or society – like the Berdeche, or ‘two spirit’ people in the Native American Indian past - and say, ‘Hey, those people were definitely lesbian or gay’. Then along comes a Trans-aware historian who says, ‘Hang on a minute, these people weren’t gay or lesbian at all - they were Trans!’
The problem is that the categories and labels by which we define ourselves now, and which we band around so freely, were not available in times gone by, so we have to be careful not to impose our concepts where they may not apply.

The Stonewall riots, however, were a defining moment for gay liberation, and what has followed, including the whole LGBT spectrum, so maybe there are continuities here worth exploring, and yet, the differences between then and now seem vast.

The Stonewall drag queens were, apparently, into ‘radical drag’ – in other words they were not entertainers, like drag queens on the commercial gay scene today, (though no doubt they were entertaining to be with). What they did was mix masculine and feminine behaviours and presentation in an attempt to subvert the rigidities of the gender binary. Remember that these events took place when radical feminism was also on the march, and there were dreams of creating a new society liberated from patriarchal oppression. 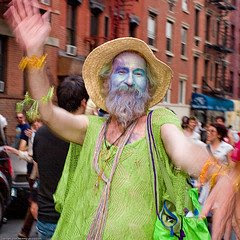 In England, in the early 1970s this radicalism was embodied in the Gay Liberation Front (GLF), some of whose members did adopt drag in the subversive spirit of Stonewall to shock the Establishment and to make sex (and gender?) more political. The Campaign for Homosexual Equality (CHE), by contrast, had a more subtle approach to change, working with the structures, rather than challenging them, though some members of that ‘camp’, notably, Roger Baker, were very interested in the history and significance of drag, and cross-dressing in general. (Baker was the author of Drag: the history of female impersonation in the performing arts).

Whether we be LGBT or heterosexual, queer or straight, most people want to be accepted in society, and to fit in, but we also need the nonconformists, and the misfits, who challenge the status quo, and highlight the injustices which so many of us take for granted. In Christian culture, people like that, who inspire our longing for a better world, are called prophets, and forty years ago in New York, when the police kept picking on a gay bar in Greenwich Village, they were ‘men in frocks’, God love ‘em.
Posted by Christina Beardsley at 23:59