Lesbian, gay, bisexual and transgender people hurt, deeply and painfully, as a result of Christian attitudes towards homosexuality. I am old enough and I have a secure-enough sense of myself not to feel pain most of the time now. But tens of thousands of LGBT people do. It’s an intolerable outrage and it takes a person like gug, the gay Ugandan, to describe the feelings and the scenario in which gay people the world-over endure the intolerance and prejudice of well-meaning Christians.

Gug has been coming out to his brothers (of which he clearly has many) one by one - yesterday to another. He doesn’t want them to discover from the TV that their brother is an out and out homosexual. He tells them quickly, not giving them much time to digest the news, because for him it’s a stressful, embarrassing task.

The brother goes and tells my dad, who was 72 yesterday, something about it. His dad is an elder of the village, the clan, the tribe. He has taken a lifetime of work to get to this position of respect. He was not happy with the news. The old man has designated gug, the second son, the apple of his eye, as heir apparent.

He has pleaded with gug to get married. He even offered gug a girl, but he laughed at him and said no thanks. Then his father told him, at least have children. Then, a year ago, he pleaded please have at least one child, even if it is a girl. Gug was deaf to his entreaties
.
His whole day was spoilt yesterday but today he tried to cover up the loss that he felt, even though it hurts, very badly. It hurts. But he cannot respect his dad’s request to remain silent, not with the threat of life imprisonment and death for gays in Uganda. There is work to do with the bill still before parliament.

Today he concluded his blog by referring to a swell office spac right in the middle of town on Kampala Road, the home to Andrew Wormack's ministries and books. He is an American evangelist married to a Ugandan woman, and robustly defends the Bahati Bill. Gug wants to know why any sane human being would support the Bill. I wondered why conservatives and so-called orthodox Christians claim, falsely, that homosexuality in Uganda is fuelled by western money and decadence, when American Christian money is channeled through Ugandan Christians to support the Bill and fuel their intense prejudice.

Gug reports a story from the USA, about Moses, a gay man from Uganda seeking asylum in the United States, who gug thinks he knows as a gay Christian with an interesting story to tell. Read gug’s own blog here. 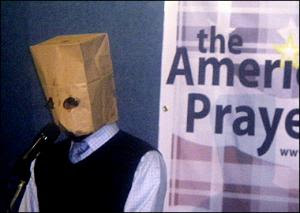 Moses gave a chilling account of the harassment and terror he withstood growing up in Uganda. He addressed reporters with a paper bag over his head to conceal his identity, speaking of how in Uganda, “one would rather die than come out of the closet,” because LGBT people are so terrorized in a culture that portrays homosexuality as “deviant” behavior. He described being beaten at school and living in constant “fear of rejection, fear of isolation by my family, making my family a laughingstock... fear of losing friends, fear for my life.” He experienced a “constant feeling of shame,” and ultimately abandoned his studies and lost his job.

Moses said that he was raped by a policeman, but feared seeking medical attention because “if I told health workers they would not give me help. They would instead report me, and the next day I would hit the headlines in the newspaper.” Moses displayed lists of suspected homosexuals published in Ugandan newspapers with headlines like “Top Homos” and “Homo Terror.” People lost their jobs and received death threats as a result of their names being published, he said.

These are the experiences of gay Ugandans and of lesbian, gay, bisexual and transgender people across the Anglican Communion. Our Communion is complicit in terrorizing and persecuting gay people. The voices raised against such inhumane attitudes are still sadly few in the Communion despite the obvious Christian demand that gay people should be treated with equal dignity and respect. The poison is allowed to spread, and gay Christians wear paper bags over their heads to protect their identities and their life. Shame on the Anglican Communion and on all bishops who fail to denounce such inhumanity.
Posted by Colin Coward at 22:07