Gug reports on the Ugandan Anti-homosexuality Bill march in Jinja 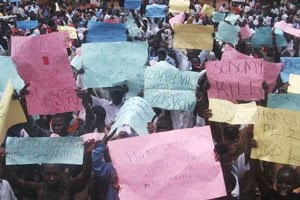 Here are excerpts from the Monitor reports:

Hundreds of Jinja residents took to the streets on Monday in support of the anti-homosexuality Bill. Chanting messages peppered with anti-gay slurs and displaying placards denouncing the practice, the demonstrators made their way around the town led by religious leaders in a procession that brought business to a temporary stand still.

The demonstrators also criticised Western leaders’ disapproval of the Bill. “Obama leave Ugandans alone,” “Obama to hell with your aid,” were some of the messages written on the placards.

Speaking following the procession that lasted about two hours, Pastor Martin Ssempa, one of the prominent supporters of the Bill, said it was a shame that the US president had taken to supporting the un-African custom and expected Uganda to follow suit. “Obama even if you do not give us money for medicine for our people, to hell with that money, we would rather die but die in dignity,” he said.

He added: “This is Uganda and we also have our rights just like the Americans have theirs. We decide for ourselves what is good for us. So these leaders should leave us alone to make our own legislations that are good for us.” The clerics, who preached against the practice at a crusade held at the Kazi Mingi grounds in the town, also claimed the media had failed in its duty to fight the practice.

Pastor Matthias Sserugo said: “The anti-gay federation is not here to express their hatred for homosexuals but to tell them that they can change and society can accept them once more.” President Museveni recently expressed opposition to some sections of the proposed Bill noting that they would harm Uganda’s foreign policy. 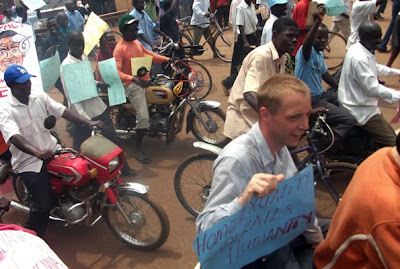 Martin Ssempa had been proclaiming that today, Ash Wednesday, a Million Man March in support of the Bill would take place in Kampala. Ssempa has been declaring that the Lenten season is the period of mobilisation and mass action to have the bill passed so that by Easter Day the bill should be law.

It would seem that the international pressure and the political implications of the Private Members Bill are having an effect not only on its progress but on the ability of Bahati and Ssempa to organize support in favour of the Bill. I sense parallels with the Nigerian Same Gender Marriage Prohibition Bill which although not dead, has never been passed into law. There are also echoes of the failure, to date, of the conservative pressure groups in the Anglican Communuion to achieve their goal of splitting the Church and isolating the North American, openly gay-affirming Provinces.

Conservatives have campaigned on these three issues with great confidence and conviction. Things are not working out as they planned, for which I give thanks. Forces hostile to LGBT people are still intense and well organised, but other, more benign forces are at work in creation. Affirmative campaigns can achieve significant change by mobilising pro-gay political and Christian opinion and individuals like gug can move mountains by staying in the heat, telling the truth and allowing the world to learn from the experience of one honest, courageous gay Ugandan.
Posted by Colin Coward at 09:40