Changing Attitude patrons and trustees hold a spectrum of opinions about the stance we should take in response to the Anglican Covenant and the strategic attitude towards the process of changing Communion attitudes towards LGBT people. The Revd Jean Mayland, retired Church Life Secretary for CTBI holds a more hawkish position than me and reacted more negatively to the Archbishop’s Presidential Address. She is pictured below on the Modern Churchperson's Union stall at Lambeth 2008. Her response follows. 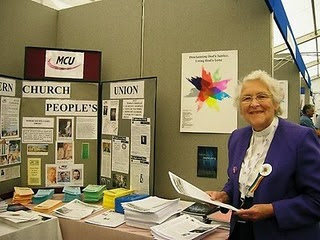 The Archbishop of Canterbury’s Presidential Address - a personal response

I first heard accounts of the Address as I drove home from York and felt very angry. I read the analysis of the speech by Ruth Gledhill in ‘The Times’ and read the text of the address through twice. I am still angry and I will try to define why.

I think it is because the Archbishop rebukes everyone else but never seems to acknowledge his own responsibility or failure of leadership. The only positive aspect is that he makes a half hearted apology to gay and lesbian people.

But first, the issue of women bishops and those of us who are campaigning for it. The Archbishop accuses us of not listening and just pushing our own demands.

I made my first speech in Church Assembly on the ordination of women in 1967 when I was 31. I listened to Dr Demant who told us that we only wanted to be priests because we were jealous of men as we did not have a penis. We wanted one too, aparently! I am now 73 and I have been listening to our opponents from both ends of the ecclesiastical spectrum for over 40 years! What a time in the wilderness. As well as listening we have been discussing and arguing and working and debating on and on and on and they never change - in fact Forward in Faith and Reform have become more and more rigid in their stance.

How dare that man tell me to listen! He came in at the end of the process and did not listen himself!

In his address the Archbishop accused us of jeopardising the current situation by insisting on provision just on our terms. He also says that what we hear is the rest of the Church saying, ‘Of course we want you – but exclusively on our terms, not yours’; which translates in the ears of many as ‘We don’t actually want you at all’.

I actually do not hear the Church saying this about women - the great majority of the Church wants us. It is the Archbishops who give us the impression that they are not listening to us and that we are expendable and of little value. We have asked for terms which place proper value of women and will not harm the church.

We oppose ‘Flying Bishops’ because they have entrenched opposition, supported the bullying of women and marred the catholic nature of the Church. We have never defended privilege or our own 'rights’. We have made demands which the majority of the church and those in secular society who have an interest at all, can see are just, fair and moderate. I do not think that over the years WATCH has campaigned in any way of which we should be ashamed .We have tried to be 'wise as serpents' but we have also tried to be 'harmless as doves.'

The Archbishop in his address did give a sort of half hearted apology to gay and lesbian people and yet at the same time he defended the opposition of the Church in the House of Lords to the Equality Bill .He argues that the Bishops in the Lords were arguing for Religious Freedom. When one remembers the real struggle for religious freedom that took place in the Communist countries in Soviet times, then he does not have a clue. Anyway what was the religious freedom he was arguing for? It is freedom for the Church to discriminate against women and against gay and lesbian people. He says the discrimination against the latter was a small exception - but it means that gay ‘would be clergy’ living in a faithful partnership cannot be ordained - or if they do many of them live in fear. It means that they and lay people can be denied jobs if homophobic church members oppose them.

Behind this is the demand that clergy and church lay workers in civil partnerships should be celibate. Why? Celibacy in the Church of England has always been a vocation and not a matter of compulsion. Faithful commitment should be supported and not condemned and gay people have as much right to enjoy the God given gift of sex as straight people. The Bishops also made serious demands about transgender people that showed complete lack of understanding and care. Only the Bishop of Chichester wavered a bit and showed a bit of care and said it was very complicated.

Why should the Church seek an exemption from the Equality Bill so that it can exclude people in this way? When I worked at Churches Together in Britain and Ireland (CTBI) the first discussion papers about bringing the legislation concerning different marginalised groups together were published and they struck me as caring and concerned and Christ-like.

Now I am ashamed and angry that the Church seeks exemption. What about Genesis in and even Paul about no Jew or Gentile etc?

The situation became even worse when the Archbishop moved on to the issue of the Covenant which he praised and desired. This would create a two tiered Anglican Communion and would be an instrument for the oppression of gay and lesbian people.

I assume that Nigeria - homophobic, anti women, allowing and even supporting violence against women (but of course very Biblically based!!!!) would be in the top tier and the USA – open, liberal, caring, mission conscious, generous but very suspect because of its Biblical criticism and gay clergy would be in the bottom tier.

The other quite amusing thing (one either laughs or cries) is that I am sure the Archbishop assumes England will be in the top tier. What would then happen if the General Synod decides that we should have women bishops, ordain practising gay men and women and bless civil partnerships? Do we then go down to level two? The province of Canterbury a second class Anglican Province – at last one can laugh rather than scream.