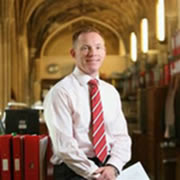 Chris Bryant MP was questioned by the magazine Time Out this week on whether he believed civil partnerships should be scrapped in favour of same-sex marriage. He said he wanted clergy to be "much more open" to the idea of treating civil partnership ceremonies like traditional marriages.

Chris read theology at Ripon College, Cuddesdon, before ordination in the Church of England in December 1986. He spent two and a half years as curate at All Saints, High Wycombe, before becoming Youth Chaplain to the diocese of Peterborough. In 1991 he left the Church to work for the Labour Party as Frank Dobson's election agent.
Chris said:

"I would like to see churches be much more open to the idea of gay relationships or partnerships being celebrated in church. All my friends who have entered into a civil partnership refer to it as their 'marriage' or their 'wedding' so the most important issue is that nobody should be discriminated against because of their sexuality.”

Nick Herbert, the Conservative MP for Arundel and the South Downs, who is in a civil partnership, and Stephen Williams, Liberal Democrat MP for Bristol West who was their first openly gay MP, both told the magazine that they would support the legal introduction of same-sex marriages.

I agree with all three, but there are two separate issues that would need to be dealt with. Civil Partnerships are the exact legal equivalent of a heterosexual wedding conducted by a registrar in a registry office or licensed venue. To enable civil partnerships to be contracted in church and to call them weddings, the law would need to be changed to enable priests to act as registrars for same-sex marriages and for them to be solemnized in church buildings.

Church rules would have to be revised – the House of Bishops’ Guidelines – to allow priests not just to pray with a same-sex couple in church (which is allowed at present) but also to bless the couple and register the marriage or civil partnership.

The Telegraph article continues with comments from Bishop Michael Nazir-Ali, a Church of England spokesman and Mike Judge from The Christian Institute.

Bishop Michael said: "Of course all citizens must have equal rights without discrimination. But marriage is the basis of the family, and the stability of the family is grounded in the sameness in difference between men and women. Those who make public law have to realise that people of faith have consciences that need to be respected."

One day Bishop Michael might become better educated in the realities of family life and human sexuality. Truly equal rights for all citizens means equality in marriage law for same-sex couples. Same-sex couples create stable families. The consciences of lesbian and gay people of faith need to be respected. Bishop Michael repeatedly speaks as if we are not already full members of the Christian community, demonstrating why the church needs to learn what justice and equality mean for Christians.

The ‘spokesman for the Church of England’ said: "The Church of England's approach has always been clear: marriage is the lifelong union between a man and a woman, and that is what the liturgy of the C of E Marriage Service is exclusively intended for.”

"On civil partnerships the Church continues to uphold that standard, to affirm the value of committed, sexually abstinent friendships between people of the same sex and, at the same time, to minister sensitively and pastorally to those Christians who conscientiously decide to order their lives differently.

"Some who register civil partnerships seek recognition of their new situation and pastoral support by asking members of the clergy to provide a blessing for them in the context of an act of worship. The Church expresses what it believes through the liturgy of its worship. As there is no theological consensus about same sex unions, no such liturgy is authorized."

For those of us who are LGBT and Anglicans, this statement is just plain stupid. It is correct about the church and marriage but that’s as far as it goes. We LGBT people are the Church alongside bishops and priests, and the majority of us in the church, bishops included, affirm the value of faithful, loving, sexual relationships. What’s with all the nonsense about ‘sexually abstinent friendships’? And the ‘new situation’ in which some find themselves? Is he, though, leaving the door open at the end, indicating that although no liturgy is authorized, some clergy do bless relationships in church.

Finally, we have Mike Judge, spokesman for The Christian Institute, who said: "Churches are open and welcoming to all people, but that is not the same thing as forcing churches to celebrate behaviour which conflicts with their religious ethos. It would be like forcing the Labour Party to celebrate a Conservative election victory. Surely the world is big enough to allow people to be free to disagree."

The kind of church that follows the teaching of the Christian Institute is categorically NOT open and welcoming to all people. There are many testimonies from LGBT people showing how abusive and unwelcoming some clergy and congregations can be.

Conservatives fear they are going to be forced to do something against their will. At the moment, lesbian and gay people are being forced, against our will, to forego the blessing of our relationships in church. LGBT people habitually create very open, generous environments around us. It is the conservative Christian mentality which creates a small, intolerant world. Our world is big enough to embrace disagreements – sadly, the church in the guise of bishops like Michael Nazir-Ali, official spokesman and organisations like the Christian Institute, are unable to embrace lesbian and gay couples.
Posted by Colin Coward at 13:57