Bishop of Gloucester tells the truth about the Episcopal Church 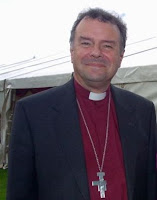 The bishop of Gloucester, Michael Perham, addressed his clergy just prior to the ordination of Mary Glasspool. In it he made an unusually strong, affirmative statement about the Episcopal Church which is worth a headline. He said:

The Episcopal Church is so thoroughly Anglican that to describe it as something less than Anglican seems to be sheer foolishness and immensely hurtful. The Episcopal Church talks about its Anglican roots, its Anglican ethos, its Anglican distinctiveness a good deal more than many members of the Church of England who hardly have the rest of the Communion on their radar. The American Church has a vibrant sacramental theology, a deep liturgical tradition, real attention to the Bible, a concern for church polity and order, and an approach to decision making that honours scripture, tradition and reason. We must do everything to stay with them and they with us. These are our spiritual sisters and brothers as much as any in the world. It would be heart-breaking if our communion with them were impaired.

Bishop Michael’s comments about describing the Episcopal Church as something less than Anglican being sheer foolishness and immensely hurtful is an astonishing criticism of other member of the House of Bishops. Too many have bought the wicked lies spread about the Episcopal Church by those now gathered in ACNA and supported in England by Anglican Mainstream and in the USA by Stand Firm and VirtueOnline, where destructive poison drips from people’s comments.

Several English bishops have repeatedly attacked the Episcopal Church, denigrated its mission and ministry and demanded that it repent of its action in ordaining Bishop Gene Robinson and be excluded from the Instruments of Communion. Bishop Michael’s truth-telling needs to extend to direct criticism of other bishops at a meeting of the House in an ideal world.

Tobias Haller is an Episcopal priest who can be relied on to tell the truth accurately and comment perceptively. He notes that the usual suspects from the Anglican Right are atwitter with comments about further rifts or tears in the Anglican Communion, accusations that the Episcopal Church has now walked apart in some formal way from that Communion, and that it certainly can't in good conscience sign on to the Anglican Covenant.

Tobias says it is important to remember that any "rift" or "tear" is not a rift between the Anglican Communion and some entity not a part (or no longer a part, as Anglican Mainstream and others would have it) of the Communion. No one has "walked apart" from the rest of the Anglican Communion, except perhaps those portions of it, such as Nigeria and parts of GAFCON / FoCA, who have chosen actually to reject the See of Canterbury as a focal point for gathering the Anglican episcopate for consultation, or who have established separatist outposts within the confines of other Anglican jurisdictions, declaring they are out of communion with the larger body.

The Windsor Report contains recommendations that the provinces have yet to endorse or act upon in a definitive way — and that includes TEC as well as ACNA, both of whom have taken actions contrary to the wishes expressed in Windsor.