Today is the second day of an appeal hearing in the supreme court brought by two gay men, one from Cameroon, the other from Iran, against previous court decisions that they should not be granted asylum in the UK.

The Cameroonian is appealing against a tribunal decision that he could return to his native Cameroon, despite the fact that he was attacked by a mob after he was seen kissing a male partner. The Iranian was told by the tribunal that he could be expected to tolerate persecution arising from his homosexual relationship, and should behave discreetly to avoid reprisals.

The Home Office policy relies on the ability of gay and lesbian asylum seekers to hide their sexuality on being returned to their own country in order to avoid persecution and to relocate to a part of the country where they won’t be recognized and will there, according to our courts and appeal tribunals, be ‘safe’. I have attended two asylum hearings for gay Nigerians and these arguments were advanced in both cases.

Punishment for homosexual acts ranges from public flogging to execution in Iran, and, Amnesty has said that homophobia is "endemic" in Cameroon.

The difference between endemic violent persecution and living in a prejudiced but notionally tolerant culture is huge, although LGBT people are still subject to abuse, violence and murder in the UK. In the Church of England LGBT people are not physically abused, but emotional and systemic abuse is routine.

In practice, as I learnt yet again at a meeting of the Lesbian and Gay Clergy Consultation yesterday, the limited legal exemptions granted to faith communities in employment legislation allows the Church of England to discriminate, legally, against us.

Discrimination in the church works very effectively thanks to the presence of conservative lobby groups hostile to the presence of gay (let alone partnered gay) people in ministry, by intimidating LGBT clergy into silence and invisibility. We live in a culture of uncertainty and insecurity as to whether it is safe or not to reveal who we are and who we share our life with.

Just as coming out is not a once-in-a-lifetime event, the same is true at every stage in lay and ordained ministry, from the selection process through theological college, job applications, meeting new bishops, diocesan staff and colleagues to clergy fraternals and deanery chapters. In the mind of LGBT ministers there is always the question – who knows what and who is it safe to reveal information about my sexuality and private life to – and what is appropriate and legal? 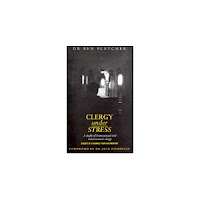 The result is a high level of depression and illness among LGBT clergy as was revealed in “Clergy Under Stress: A Study of Homosexual and Heterosexual Clergy in the Church of England” by Professor Ben Fletcher published by Geoffrey Chapman in 1990. Ben was shocked by the much higher levels of stress found among gay compared with heterosexual clergy.

At yesterday’s meeting, one priest who had experienced a breakdown reported that he was referred to a psychotherapist by the diocese. The therapy was helpful until the moment when the priest began to explore his sexuality and asked whether he should tell the bishop about experiences related to his sexuality. The therapist told him dogmatically that on no account should he tell the bishop. The priest terminated therapy at that moment and reported what had happened to the bishop who agreed that no priest should ever be referred to that therapist again - full marks, on this occasion, to the bishop and priest for acting so robustly.

I have participated in moans about this state of affairs for over 30 years, exchanging personal and anecdotal evidence with LGBT clergy and colleagues. We have experienced ourselves as victims, trapped by the authority of bishops who have the power to block appointments and terminate vocations. Changing Attitude has ample evidence of bishops blocking the appointment of priests in Civil Partnerships as well as the total opposite – bishops approving such appointments. It’s no surprise, therefore, that partnered gay clergy have no secure idea about their status in the church.

This is intolerable and we must find new ways of challenging and changing the secretive, collusive and abusive culture of the church. The exemptions from employment legislation need to be overturned in as short a time scale as possible. Diocese by diocese, deanery by deanery, parish by parish, we need to educate people until the majority are aware of the stress and prejudice which result from the secretive and sometimes abusive culture in which LGBT lay and ordained people minister.