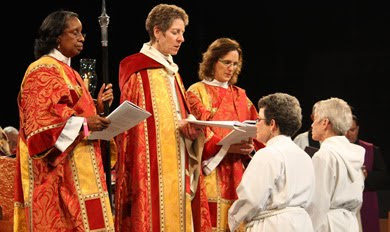 The service at the Long Beach Arena was themed 'Rejoice!', lasted three-hour hours and was attended by 3,000 clergy and laity, family and friends, civic, ecumenical and other guests. Los Angeles' rich diversity was represented in song and dance by a mosaic of varying races, ethnicities, ages, genders, and sexual orientations. 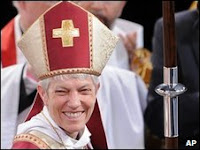 In a sermon interrupted by applause and laughter, Bishop Jon Bruno Bruno paid tribute to the historical occasion, recalling how he had once protested women's ordination, and now would be serving with two women bishops. He said: "The world's transformed only if we turn to each and every one of our brothers and sisters and see the face of Christ superimposed on them. The ones we disagree with the most are the ones we're obligated to share our lives and teach the most."

The consecration service was disrupted briefly by a man and a young boy who held up a sign and a bible and shouted anti-gay comments. Applause erupted when someone in the congregation yelled back: "We're praying for you."

Members of Westboro’ Baptist Church protested outside holding placards. Referring to them and to the disruption inside, bishop Bruno said, "They don't understand the inclusive nature of the Episcopal Church."

Conservative groups in Ireland including Reform issued a statement saying many Christians will share their sorrow and see Mary Glasspool’s consecration as a defiant rejection of pleas for restraint and as a rejection of the pattern of holiness of life called for in Scripture and endorsed by believers over the centuries, elevating to senior church leadership a person whose lifestyle is contrary to the will of God revealed in Scripture.

The claim the ordination shows a deliberate disregard for other members of the Anglican family and suggests that TEC does not greatly value unity within Anglicanism. They express support for the many people within The Episcopal Church who feel alienated and hurt.

Dr Philip Giddings and Canon Dr Chris Sugden issued a statement on behalf of Anglican Mainstream. They repeat their oft-made statement that the consecration shows that TEC has now explicitly decided to walk apart from most of the rest of the Communion.

They think it should result in three consequences:
• TEC withdrawing, or being excluded from the Anglican Communion's representative bodies.
• A way must be found to enable those orthodox Anglicans who remain within TEC to continue in fellowship with the Churches of the worldwide Communion.
• The Anglican Church of North America (ACNA) should now be recognized an authentic Anglican Church within the Communion.

The BBC reported that the ordination is likely to increase the turmoil in the Anglican Communion, coming despite warnings from the Archbishop of Canterbury that it would deepen an already bitter dispute on sexuality. He had urged the American Church not to proceed with the ordination, warning that it would further alienate traditionalists who believe active homosexuality to be a sin. The latest ordination is likely to accelerate the gradual marginalisation of the Episcopal Church within a two-tier Communion and increase tensions between Anglicans elsewhere. 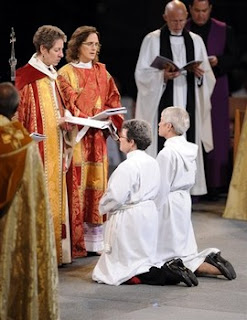 All the negative comments about Mary Glasspool’s consecration made above can be looked at the other way round, from the perspective of those of us who are lesbian, gay, bisexual and transgendered and all who experience God’s love as inclusive and unbounded and follow a path of grace and not law.

It always astonishes me (not true, it no longer does) that conservative evangelicals who claim to be the true holders of authentic biblical Christian faith are obsessed with law and quite unable to follow the teaching of Paul, let alone the teaching of Jesus.

Bishop Jon Bruno said the protestors don’t understand the inclusive nature of the Episcopal Church. The Anglican leaders campaigning against the full inclusion, ever, of LGBT people in the church have a different theology from me. The true division in the church is between people and cultures which are re-learning from many sources the essence of Jesus’ teaching about God’s utterly gratuitous gift of love in creation and those who have adopted a legal understanding of God’s relationship with creation (simplifying drastically).

The majority in the Communion have agreed on a course of action in the Windsor Report which puts the Episcopal Church in the dock. I think the majority are wrong, not primarily because they are mistaken about God’s attitude to human sexuality but because they are wrong about Jesus and God’s relationship with us that Jesus reveals.

Far from Mary Glasspool’s consecration being a rejection of the pattern of holiness of life called for in Scripture as the Irish claim, I think that what the Episcopal Church is doing is actively living and modeling a scriptural pattern of holiness. TEC not only values the unity of the Anglican Communion but more importantly, values true discipleship in following the gospel of Jesus the Christ.

TEC is not walking apart from the rest of the Communion as Anglican Mainstream claim, the Anglican Communion is walking away from the Gospel of infinite and intimate love, tender and transforming love, sacrificial and life-giving. The consequences which Mainstream identify are irrelevant to those of us following a Christian path which I readily admit is dramatically different from the majority of Christian denominations.

Personal experience has taught me that the majority path is inherently abusive and corrupt and the continuing scandal of the abuse of children and young people in the Catholic Church is showing all who have eyes to see and ears to hear what happens when institutions follow false gospels – they become institutionally abusive and blind to love and truth.