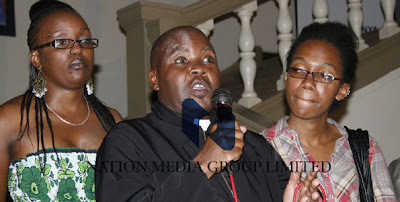 Revd Michael Kimindu, Changing Attitude’s contact in Kenya, took part in a gathering of sexual minorities at the National Museum, Nairobi where they assembled to mark the International Day Against Homophobia on May 17. He was given the opportunity to talk about what Other Sheep Ministries and the Metropolitan Community Church are doing to check religious-based homophobia and transphobia. On his left in the photo above is activist musician Kate Kamunde from Afra Kenya and Audrie Mbugua (right) from Transgender Kenya.

Michael based his talk on the contrast between John.3:16 and 17, love and not condemnation. He said that we advocate for acceptance and the full inclusion of LGBTI people of faith, and of their parents and friends in their respective faiths. He invited those present to MCC which is an inclusive church. At one point someone contributed in the manner of an African American Pentecostal enthusiast saying: preach, preacher, preach!

Scores of Kenya homosexuals celebrated the International Day Against Homophobia on Monday and demanded more recognition. They sung and danced and for the first time allowed media coverage of their function to fight stigma and victimisation.

“Ten years ago there was no public place that could have hosted such a function,” said Kenya Human Rights Commission director Muthoni Wanyeki, whose lobby organised the event. “Although the Committee of Experts did not allow same sex marriage in Kenya the Proposed Constitution would enable all Kenyans access health and are free from discrimination and violence. The basic rights are for all Kenyans including people from the gay community.” Ms Wanyeki, however, said despite the government allowing the gay community to meet, the battle against harassment of and violence against sexual minorities is still on.

Kate Kamunde said: ”Spaces are opening up to accommodate us which was not possible two years ago.” She regretted that government officials gave the function a wide birth despite being invited.

Kenya National Commission on Human Rights (KNCHR) commissioner Lawrence Mute condemned prejudice on grounds of their sexual orientation. “Let us ensure nobody is discriminated either in school, at work or even in the society especially because of who they are,” he told participants.

Dr Ben Sihanya, the dean of the School of Law at the University of Nairobi emphasised the need to focus on issues of sexual minorities in the country. “We are quick at criminalising issues that we do not understand,” he challenged homophobes, who harbour negative attitudes and feelings towards homosexuality.

Galck official David Kuria termed both religious homophobia and transphobia as ‘senseless violence,’ and called for a society that was more tolerant to the welfare and needs of LGBIT persons in the country. 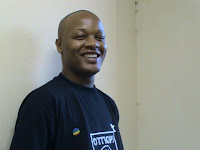 I’ve just connected online with Dennis Nzioka, the religious relationship assistant at Gay and Lesbian Coalition of Kenya (Galck). He urged religious leaders to tolerate gay people. “We are born this way. We are created this way. We want to feel comfortable when we come to church. They should stop preaching discrimination against gay people. Just as I am proud to be African I am proud of being gay. There’s nothing wrong with what we are doing,” he said.

Mr Nzioka was happy that homosexuals could now be allowed to meet in the open and that his family also understands him. “If we had a family meeting, I usually went with my boyfriend but I am currently not dating,” he said, adding that there were already many gay marriages in Kenya “although we don’t expect licensing in near future".

Lesbians ask to be blessed

After Michael’s speech a member of the audience approached him and asked if he could bless her union with her partner there and then. He asked her to call the partner and they moved to a corner where Michael gave them some pre-marital counselling. They agreed to do bless the relationship the following evening at their house giving them time to compose themselves, buy rings and invite some friends.

Michael conducted the service on the 18th May at 8:30pm. It was attended by nine other women friends and one gay man. The couple are 20 and 25 years old. This was the first blessing he had conducted for lesbians and the second for a same sex couple having done one for two gay men last year.

Michael received a phone call while he was sending this e-mail. A woman called asking the location of his church so that she could come on Sunday. Michael comments that knowing how to respond to such calls is always tricky because you never the caller is genuine. He asks for prayers, hoping that God is in control.

Michael shows that it is possible to create safe spaces in African culture for a message of full inclusion to be preached and for lesbian and gay couples to affirm and bless their relationships. Reading Michael’s account, the scenario didn’t feel that different from the UK, where the blessing of relationships in church still has a certain clandestine quality and preaching and teaching about inclusivity in churches is still a minority activity.

The difference between Michael’s account of his activity in Kenya and the sentence of 14 years with hard labour given to Steven Monjeza and Tiwonge Chimbalanga in Malawi is outrageous and shocking. I’ve been pondering all week what Changing Attitude might be able to contribute to the campaign to free them which Peter Tatchell is pursuing. We have only one recently made gay contact in Malawi.

One avenue which we can explore is the friendship I have with Bishop James Tengatenga of Southern Malawi who was elected last year in Jamaica as chair of the Anglican Consultative Council, and I will be drafting a letter to him.