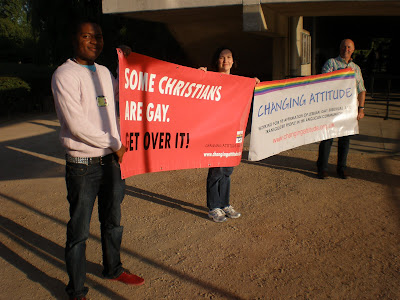 On Friday evening we welcomed members at both entrances to the Synod meeting hall with the Changing Attitude banners and leaflets handed to synod members telling two stories, one of a lesbian and the other of a gay couple, all committed Christians, one couple committed evangelicals, who have been deeply wounded by the church’s refusal to bless their relationships.

The new CA banner is based on the Stonewall campaign of 2008 and reads ‘Some Christians are gay. Get over it!’ The banner was welcomed enthusiastically by many Synod members. Those who disagree with our presence walk past and refuse to take a leaflet. They are, of course, the people who would most benefit from reading the testimonies, supporters of FOCUK.
Posted by Colin Coward at 15:51