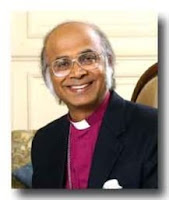 The Bishop of Rochester, Dr Michael Nazir-Ali and 15 other bishops are attending or supporting the launch of the Fellowship of Confessing Anglicans in Westminster Central Hall tomorrow. Thirty eight diocesan bishops are not attending nor are sixty three area or suffragan bishops. The 16 bishops are divided from the majority of English bishops in at least three ways.

The majority of bishops of the Church of England do not support this schismatic movement which is destined to become yet another sect.

The majority of bishops understand what it means for a person to be lesbian or gay even if some, such as Graham Kings, newly appointed bishop of Sherborne in my home diocese of Salisbury, hold a conservative teaching on homosexuality. Bishop Graham will be a good pastor to LGBT people.

The majority of bishops do not think there are two different sorts of religion in this country, one which is pro-gay and another which is traditional and orthodox. The fault lines do not fall so simply.

Bishop Michael claims that he welcomes homosexuals and then adds conditions which judge and condemn lesbian and gay people.

LGBT people know they are not welcome at FoCA churches nor welcomed by FoCA-supporting bishops. Their claim to be welcoming to us is a lie. My encounters with some of their leading figures at Anglican Communion meetings reveal them to be hostile and judgmental. They demand repentance. They deny that people have a gay identity. They see sin where we experience love and holy intimacy. FoCA is obsessed with sex – gay sex.

Michael Nazir-Ali’s ignorance is shocking. Does he not see through his own duplicity and double-think? Where is his or FoCA’s parallel campaign against the millions of heterosexual people who stray from what he claims is the Bible’s teaching by enjoying not only pre-marital sex but sex with multiple partners prior to marriage. Where is the campaign against divorce which gives couples the freedom to enjoy sex with more than one partner?

Bishop Michael repeats the favorite conservative canard – that there are two different sorts of religions, one having a completely different view of the Church and Christianity from the other. This is why these 16 bishops feel justified in creating a new sect. They are so obsessed about the moral degradation which they think goes with homosexuality that they lose all sense of perspective. Bishop Michael and I continue to share the fundamentals of Christianity with the 101 bishops not attending tomorrow. We differ in our understanding of my sexuality and how I live as a partnered gay Christian. Is this really cause for schism? Not for the majority of bishops or people in this country, no it isn’t.

The majority are wise and mature enough to know that LGBT people are integral to the life of the church and are not to be distinguished from heterosexuals in terms of our morality or holiness of life.
Posted by Colin Coward at 08:01