The service led by the Revd Nicholas Wynne-Jones was attended by not more than fifty people. 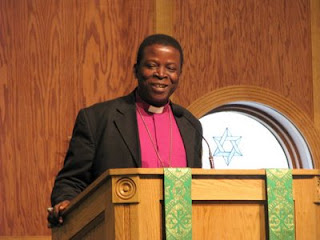 Bishop Nicholas began his sermon by greeting the congregation. He explained that he has been sent to represent Archbishop Peter Akinola, Primate of All Nigeria. The theme of his message was being "Contend for the faith" Jude 3.

Bishop Nicholas explained that the secularity of society is taking over the world and that Christians needs to stand up against it. Our problem is not Roman Catholics or Pentecostals but liberalism and Islam. He said he is proud to be among those in the Communion who can raise their hands to say that have different views. He said they are not planning to start a new church but to find a safe place for Bible-based orthodox believers.

He talked of the rising influence of Islam in Nigeria and other parts of the world and the dangers coming ahead if people don’t do anything. You must start speaking out or you will become a slave in your own country, he said. He talked of the need for a stronger worldwide evangelism to tackle the influence of Islam and secularity.
He said that the fabric of the Communion is torn apart by those who want to accept false teaching. Moslems are influencing Africans with money and converting them to Islam. The issue of polygamy is a problem for the Nigerian church and they are addressing it. He said the Nigerian church is challenging the government over corruption but he is also aware that corruption is a global issue - he was following the news in Britain.

The bishop carefully chose his words. He talked of the power of anointing in the Holy Spirit and the gift of the Holy Spirit and charged the congregation to be bold and start going out to preach. He is concerned that prayer and preaching are offensive to many in Britain. The mother church needs to realise that any action they take will be affecting others in the communion.

After the sermon, the bishop was asked to come out so he can be prayed for. Bishop Okoh said the church of Nigeria needs prayers because those in the Nigeria government don’t like to hear the truth or take advice. The church needs prayers to keep speaking out. Pentecostal churches are spreading and preaching materialism which is causing problems for Anglicans. (At the beginning of his sermon he said their problems have nothing to do with the Pentecostals)

An elderly man prayed for Dr Allen and his wife Elizabeth, both doctors working in Zambia. He extended his prayers to attack the Episcopal Church in America asking that God help them to repent and come back to the Biblical truth.

The majority of the people at the service were white and elderly. I wondered where the young evangelicals in the Church of England and the ethnic minority Anglicans were. Why didn’t they come to hear the representative of the Primate of All Nigeria? I had expected to see the church full of Nigerians who had come to hear their Archbishop speak. Part of the answer is that the ordinary people in the pews in Nigeria don’t have an interest in homosexuality. The issue is a problem to the leaders of the Church of Nigeria and their allies.

Why didn’t these elderly white people come with their family and friends? I don’t think using issue of homosexuality as a tactic to divide has given the conservatives much gain. The British younger generation as in Nigeria or elsewhere are not interested in homosexuality as divisive issue, thanks be to God.

After the service I was the first person to approach Archbishop Nicholas. I greeted him and introduced Chris to him. I asked him if he was aware that in his own province in Edo State men suspected of being homosexuals were arrested and paraded on TV as common criminals. He said he had been away from home for a long time so he wasn’t aware. I asked if I could take a photo of him and he said no because he doesn’t like his photo being taken.

Archbishop Okoh and all those involved with Anglican Mainstream and FoCA present us with a big challenge. The work we LGBT Christians are called to is to evangelise and bring new gay people to Christ and to reconnect with those who have left because of the hostile attitude of the church.
Posted by Colin Coward at 12:02