A Place at the Table

It was Jesus’ table-fellowship with tax-gatherers and sinners, as much as what he preached, that upset and angered the self-righteous ones, who were scolded by the Lord for their pride and hypocrisy. But saints and sinners, smug and meek alike, have found, and still find, a place at the table of which Jesus is the host; and Christian worship now is just as much a foretaste of the messianic banquet as the great feasts that Jesus celebrated with the multitudes.

So, if there are two versions of the gospel and the faith today then I would like to align myself with this New Testament vision of inclusion, rather than with people who try to demarcate between those who are in and those who are out. And this is not merely because I am likely to be seen as 'an outcast and a reprobate', according to the latter model, but because this is how I read the Scripture images about the life of the people of God.

It was, therefore, highly symbolic, in my opinion, that at a General Convention hearing where one of the Transgender resolutions was heard, committee members were seated in a horseshoe arrangement rather than as a panel. An open space was provided so that, as people stood to give their testimony, they formed part of a continuum rather than ‘them’ and ‘us’. 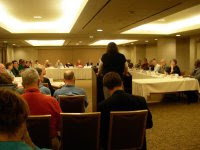 The committee members had ensured that there was a place at the table, where people could be properly heard. The outcome of this, and other deliberations, as we now know, is that General Convention, through its House of Deputies and House of Bishops, has declared that, in the Episcopal Church, there is a place for LGBT people, not just at the table, but also in the discernment process for ministry. No one is to be excluded just because they are lesbian, gay, bisexual or transgender.

Those who were there have testified that they could feel the Holy Spirit working powerfully. I can and do believe that. Alleluia. Amen

Posted by Christina Beardsley at 19:10