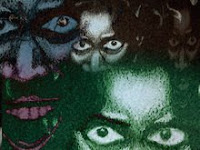 Pinknews reports today that a number of fundamentalist Christian churches in Britain are thought to be performing 'exorcisms' on gays and lesbians to cure them of homosexuality - newsletter@pinknews.co.uk.

Their report is based on the Metro which says that a Pentecostal church in north-west London is using exorcism as a 'cure' for gay and lesbian people.

The Rev John Ogbe-Ogbeide who runs the United Pentecostal Ministry in Harrow says he carried out exorcisms on gays four or five times a year and that the procedure always worked. He said: "The evil spirits are telling you what's wrong is right, the opposite sex is not attractive." He cited a recent case where he exorcised a young man who was about to get married but was in love with a man. Rev Ogbe-Ogbeide added that the procedure could be carried out at any age, as demons could take hold of a person at any time.

Peterson Toscano who was invited by LGCM to perform at Lambeth, has been subjected to three exorcisms. He said: "The premise of these was that foreign demonic forces infiltrated my body and manipulated me so that I could not turn from being gay. I felt desperate for a cure especially after trying so hard to change through other means. This is a form of religious abuse and spiritual violence. I found the experienced traumatized me."

Meanwhile, I learnt from Giles Goddard that Anglican Mainstream has sent an email to members of General Synod and others to tell them that the Inclusive Church web address is an “attack website”.

The person responsible (or irresponsible) for the email is Canon Chris Sugden, member of General Synod and Executive Secretary of Anglican Mainstream International.

Chris was responding to an alert from an Anglican Mainstream supporter and tech specialist. In he email he says he really appreciated the supporter taking the time to write “and fill us in on how to respond to some disconcerting technological challenges. The link his computer found to be a known attack website was that of Inclusive Church.”

The Mainstream supporter says his computer security system classified a link to the Inclusive Church website in a news item posted today by Mainstream as a 'known attack website'. He said this meant that the website contained a malicious program designed to infect the PC when visiting. 'Attack' programs are designed to install programs that steal private information, use your computer to attack others, or for spying purposes.

A cautionary warning might have been sensible, with all this possible spying going on and demonic forces being manifested by gays in the church and computers being used to attack others - a frightening scenario indeed.

On the other hand, it would have been more sensible for Mainstream to have linked to the current, healthy, virus–free Inclusive Church URL: www.inclusivechurch2.net. It would have been even more sensible and Christian to have checked with Inclusive Church before sending an email to all members of General Synod telling them that Inclusive Church’s website is an attack website. This is how unhealthy demons and viruses designed to poison attitudes to LGBT people get spread in our church.
Posted by Colin Coward at 17:56