The Changing Attitude banner and presence at the General Synod in York looks great. It’s a pity, though, that we were unable to send anyone to the General Convention of the Episcopal Church, taking place in Anaheim, California at the same time.

And it would have been very appropriate, on this occasion, if Changing Attitude’s Trustees for Trans people could have been at Anaheim, given that five Trans inclusive resolutions have been put forward there. No matter, the Integrity team at General Convention are well aware of the love, support and prayers of Changing Attitude, England, and I am in close touch with the Trans members of that team.
‘Listening to Trans People’ was the title of the seminar I convened and chaired as part of last year’s Lambeth Conference Fringe, where I was joined by the Revd Dr Cameron Partridge of TransEpsicopal and Integrity; Mia Nikasimo, the founder of Trans Afro, Stephanie Sheppard of the Methodist Church, and Steven, a member of the UK based group for Transgender Christians, the Sibyls. The Lambeth Bishops’ programme was intense and relentless, but several bishops made a real effort to join us (they should have been at provincial meetings) for what proved to be a moving contribution to the listening process. 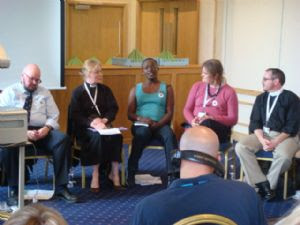 From what I can tell, a similar profound listening seems to have happened in the committees of General Convention where the Trans resolutions have been presented. It is not automatic for resolutions to reach the main convention. Each one is scrutinized carefully in committee, and additional evidence reviewed before a decision is made.
The Trans resolutions are of two kinds. One set, heard before the committee on National and International Concerns, invites the Church to support transgender civil rights. The other set, heard by the World Missions Committee, calls on the Church to include “gender identity and gender expression” in its ministry non-discrimination canon.
Two hearings on transgender matters in just twelve hours was exhausting and exhilarating for the Trans Christians who gave their testimonies, but it is obvious that they felt heard, sometimes by committee members for whom the whole idea of Trans was relatively new. 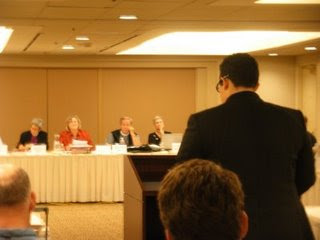 The Episcopal Church is often demonised for pushing ahead with an inclusive agenda in defiance of the rest of Anglican Communion, but the World Missions Committee was the setting for the resolutions about ordination precisely to look at the global implications. There, Cameron was able to point out that there have been transgender priests in the Church of England since at least 2000. And as Mia’s evidence to the Lambeth seminar showed last summer, Trans people are to be found in African churches and culture and not just in the West.
In Changing Attitude we wait and pray hopefully for further gracious listening when the resolutions come before General Convention.
Christina Beardsley
Posted by Christina Beardsley at 11:24