Changing Attitude’s contact in Kenya reports on his ministry 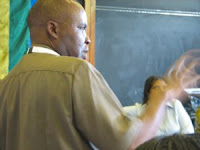 The Revd Michael Kimindu, contact person for Changing Attitude in Kenya, has emailed today updating about the ministry he is developing amongst Anglicans. Michael is an Anglican priest and was part of our team at the Lambeth Conference last year. He was an army chaplain and has children but is now distanced from the Church in Kenya because of his support for lesbian and gay people.

A small group of LGBT Christians meets every Sunday in his house to worship and pray and Michael continues to offer his wisdom and training skills to Anglican groups.
He also offers ministry under the banner of Other Sheep Ministries, a US-based non-denominational international ministry to LGBT people. On July 18th Michael conducted a one day seminar about homosexuality in Kisumu attended by 12 people, two of them priests and ten lay people, all Anglicans from two different Dioceses. They all expressed satisfaction and asked for frequent similar seminars.

Michael preached in an Anglican Church on July 19th invited by the priest who had helped organise the seminar. In his sermon he preached about church growth and how inclusiveness is important for growth. The congregation have requested that he returns to preach again.

On July 21st Michael addressed an early morning meeting of the All Saints Cathedral Church Men's Committee. The six men included one priest. He talked about homosexuality and the need to be open to discussion and was well received. The Chairman of the HIV/AIDS committee invited him to talk to people living with HIV/AIDS soon.

In the afternoon, he talked to a meeting of a similar association representing four dioceses with 15 members attending. They expressed the need for future meetings with him. Michael says the day was very exciting day for him.

A number of Anglican clergy in Kenya have told Michael they would like to have a forum where they can express their opinions about homosexuality without fear and talk honestly and openly. It is, of course, very difficult for priests to find anyone with whom they can explore their feelings and thoughts about homosexuality. In a very small but significant way, Michael is contributing to the Listening Process and is helping some clergy in Kenya to a better understanding of human sexuality.

Michael says the clergy are looking for leadership and hopes Changing Attitude will not shy away from supporting him. Changing Attitude is committed to support people from around the Communion who share Michael’s bravery in risking his livelihood for the sake of teaching an inclusive Gospel.

He has asked for an appointment with the new Archbishop and promises to report following the meeting. Donations to be sent to Michael to enable him to develop his ministry among Anglican congregations in Kenya can be made on the CA web site.
Posted by Colin Coward at 17:43