The abusive language and myths used about TEC 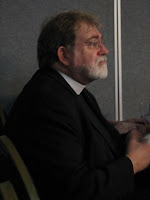 The Rev. Philip Ashey has commented on the Pastoral Visitors Scheme and the idea of mediated conversation on parallel jurisdictions on the Anglican Mainstream website http://www.anglican-mainstream.net/?p=10168#more-10168.

It is the language he uses about the Episcopal Church which interests me more than his analysis of the proposed scheme. Philip uses abusive phrases about the Episcopal Church which occur time and again on the websites of those who have left TEC and seek to create a alternative province. The target of their campaign was initially the Episcopal Church, to which the Church of Canada was later added. The Archbishop of Canterbury, the processes being followed by the Communion (Windsor Report, Covenant, etc.) and the role of staff at the Anglican Communion Office have also come under attack.

Philip Ashey uses these phrases about the Episcopal Church in his article:

I have attended the last two General Conventions of the Province. I have worked closely with leaders and volunteers from Integrity, the Chicago Consultation and other staff members and congregational members of TEC.

Those who have separated from TEC have constructed a myth about the church to which they used to belong. The phrases “revisionist leadership” and “false gospel and teaching” are used repeatedly to poison the mind of other Provinces towards the Episcopal Church.

They are not true. If TEC has revisionist leadership, a false gospel and false teaching, then so does the Church of England and so do I. But I don’t. No time to outline my theology here, but my friends in the congregation at St John’s Devizes would vouch for my orthodoxy and my passion for the Gospel and the mission of the Church.

As a Christian, I find the poison that those who have left the Episcopal Church introduce into their narrative and strategy against TEC difficult to stomach. It sickens me.

All parties to the conflicts in the Communion make mistakes and from time to time, categorise those from other networks in ways that are false. I don’t like being called a pansexualist. To me, that’s another way of denigrating my integrity, my sexuality and my Christian life and witness. Pansexualists are among those categorised as revising teaching and bearing a false gospel and false teaching.

While I’m writing about this, let me add my irritation (to put it mildly) with the portrayal of those who have left TEC as the victims in the dispute, and TEC and LGBT people as those with power at the centre of decision making – if only!

Philip Ashey says those who left TEC have been rewarded by “inhibition, deposition, loss of income, costly litigation, and/or loss of their churches.” They are “victims of TEC’s attempt to literally destroy them corporately, individually, and financially.”

Philip Ashey is here at the ACC meeting, the priest nominated by Archbishop Henry Orombi as the Ugandan clerical delegate to the ACC whose nomination was declined because he was deemed to be not duly qualified. He is Chief Operating Officer of the American Anglican Council.

Oh, and he doesn’t think a Pastoral Visitors scheme would experience any more success than the Panel of Reference. He thinks the Windsor Continuation Group recommendations miss an opportunity to bless the mission of the ACNA.
Posted by Colin Coward at 15:58