The delegates at the ACC meeting in Jamaica travelled to parishes in different parts of the island today to take part in worship and engage in Mission Encounters with members of the church after the service.

Tomorrow, Monday, they will be joined by representatives from the Diocese of Jamaica and the Cayman Islands who took part in the encounters. They will meet in closed session initially and in an open plenary session at 10.30 when I and other journalists will be able to witness and report the results of the encounters. 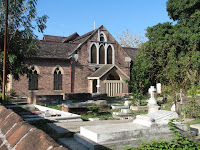 I attended the nearest Anglican Church to my hotel, St Andrew Parish Church at Half Way Tree, a complex of road junctions dominated by a dramatic concrete bus terminal. The kapok tree that stood here disappeared in the 1870s. The church by contrast huddles low on the ground surrounded by a cemetery. The foundations were first laid in 1692, but it was rebuilt and has been extended several times. The outside is unremarkable, brick, but the interior is beautiful, dominated by chandeliers and stained glass at the liturgical east end. 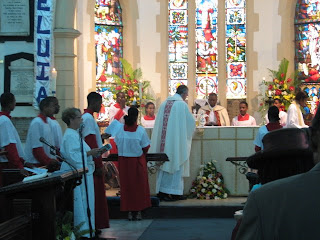 Dr Philip Aspinall, the Primate of Australia, presided and preached. The service was familiar, somewhat surprisingly so – the setting used was the same as we sing in Devizes. The hymns were also mostly familiar. Following a trumpet fanfare we sang ‘All praise to thee’ to Engelberg, the Gradual was ‘In Christ there is no East or West’, the Offertory ‘God is love’ to Abbot’s Leigh and Father Lord, we offer you’ by Richard Ho Lung, which I would love to sing in Devizes. ‘There is a redeemer’ and ‘Lord of our diversity’ were sung during Communion and the Recessional was Jesus, Prince and Saviour’ sung to St Gertrude. 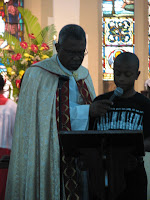 Sirrano the Rector welcomed Dr Philip Aspinall and the ACC visitors and I was welcomed by a woman lawyer sitting next to me. It was mother’s day, so about 50 members of the Mother’s Union, resplendent in white, sat in a block towards to back. We sang ‘Faith of our mothers’ and a young boy read a poem, very movingly. 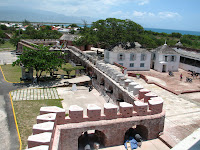 I met up with some colleagues after the service and we drove to Port Royal, at the end of the Palisadoes, the narrow 16km long spit which encloses Kingston Harbour. The British settled here in 1656 and built a fort, now called Fort Charles, to defend the entrance to the harbour. 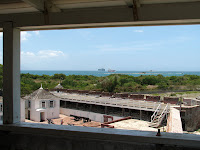 Time and the elements haven’t been kind to Port Royal. An earthquake in 1692 destroyed most of the town, two thirds being lost under water, and killed over 2,000 of the town’s 8,000 population. Another earthquake a century ago and a hurricane in 1951 did further damage. The area gradually silted up and severed the Fort’s connection with the sea. 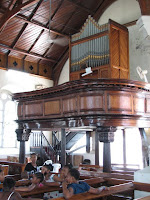 At the entrance to the Fort is the church of St Peter, brick built in 1725. Their Communion service had just finished and we were able to meet members of the congregation and visit the church. It has an amazing wooden organ loft constructed in 1743 and beautifully carved and decorated. 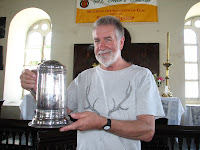 The population of Port Royal has shrunk to 2,500, there are several churches serving the population and the congregation struggles to maintain a beautiful and historic building. The communion vessels used by the church are said to have been donated by Captain Morgan, buccaneer who gave his name to a certain rum. Your reporter in Port Royal was allowed to hold the church flagon.

Lunch was ordered next at Gloria’s Rendevouz, a wonderful open air restaurant, and while we waited for it to cook we hopped round the corner to Morgan’s Harbour hotel and marina, standing in the old naval dockyard. A strongly iced pineapple juice was welcome. Port Royal was notorious centuries ago for pirates and buccaneers, so to add authentic period flavour, the hotel desk is staffed by a man dressed as a pirate. He was taking a phone call as my colleagues took pictures of him, and began to camp it up. I did just wonder …

Our sojourn away from the ACC meeting concluded with a visit to Devon House, built in 1881. We didn’t go to visit the house, to be honest, but I-Scream, in a courtyard to the rear, which, because it was Mother’s Day, was crowded and we queued for a long time. But the mango ice cream was worth it!

Today’s break in ACC business has been worth it. I’ve been able to read other reports of Friday’s Covenant debate. I knew conservative reports would be strongly judgmental of the debate and the outcome, both because of the way journalists here were reacting and because it was simply inevitable. The atmosphere here for everyone else is calm. If we are in a crisis, it is one fuelled by those who want to cause chaos. The Anglican Consultative Council itself is alive and well and conducting business as usual.
Posted by Colin Coward at 03:10