Archbishop of Canterbury emphasises patience and reconciliation, not instant resolution 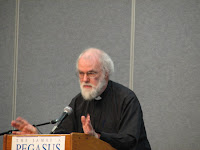 The Archbishop of Canterbury, responding to a question at the end of an hour long session on the Windsor Continuation Group report, offered “naught for your comfort.” Mr Abraham Yisa, lay delegate from the Church of Nigeria, had said: “We have listened this number of years with nothing coming, there has to be a point when we stop. There is endless listening, ad infinitum, we have to make a decision.”

It was a heartfelt plea for closure, with which +Rowan empathised. But with passion he said that sooner or later we would have to hear the voice of Jesus saying, there is your brother, there is your sister, go and cut through the briars that divide you and be reconciled with them. “Reconciliation at the level it matters between Christians,” said +Rowan, “is something that takes as long as it takes.”

Archbishop Rowan was presenting the report of the Windsor Continuation Group (WCG) to ACC-14. He briefly outlined the history which prompted the work of the WCG, presented the 10 recommendations from the report and spoke briefly about the concept of ecclesiastical deficit which appears in the report.

The first two recommendations – about The Listening Process and The Moratoria – most affect LGBT people.

The report asks for a move on both sides to a shared waiting upon God. The Archbishop said there has to be an attempt in every Province to find what stage we are at in discussions about human sexuality and move to where the Communion is as a whole on human sexuality. The report recommends that serious study of homosexuality and the Listening Process should be continued, reinforced and deepened. Without this, the appeal for restraint on all three moratoria will sound hollow. The report argues that we share our hopes, convictions and fears more honestly. A report on the Listening Process will be presented on Wednesday afternoon.

When the report asks for a shared waiting upon God, to whom is it addressed? - to bishops, Provinces and church structures, or to individual lesbian, gay, bisexual and transgender Anglicans? We, individual LGBT Anglicans, are already where the report doesn’t want us to be. In the UK we, lay people and priests and bishops (retired if not active), contract Civil Partnerships and the equivalent happens in other parts of the Communion,. We are already living a pattern of life the church claims to judge and inhibit, and we are not and will not be inhibited.

Provinces may act with restraint in withholding consent for partnered gay men and lesbians to be elected or appointed and consecrated as bishops and in formally approving liturgies of blessing. But in the UK there are many partnered lesbian and gay lay people and priests and parishes offering services of prayer and dedication (and blessing).

Addressing the moratoria, Archbishop Rowan said the report hopes that Provinces will hold back from actions which deepen divisions or make the holding of conversations more difficult. The moratoria are not intended to throw blame around the Communion. The actions taken so far have deepened, not resolved our divisions and we all need, simultaneously to step back from the brink.

The moratoria are the means by which we offer one another space, holding back from something the Communion as a whole is unable to commit itself to. Are Provinces prepared to hold back from doing those things inhibited by the moratoria while we have a conversation about why we think this is a good thing? The North American churches need to be heard describing why, with same-sex blessings and ordinations, they have explored this in depth and believe it to be right, with the same generosity accorded to conservatives.

Before we say goodbye to each other, said +Rowan, we owe it the Lord of the Communion to have this conversation.

The final recommendation of the report addresses mediated conversation on parallel jurisdiction. In North America, the Archbishop said, there is more than one body claiming the name Anglican. We are faced with a very anomalous situation – can we go forward without too much destructiveness, bitterness or litigation? Money is apparently available for mediated negotiation – I wondered whether the willingness is there on all sides to commit to such a process.

Archbishop Rowan concluded by talking about the meaning of ecclesiastical deficit, by which is meant, we are not sure what sort of church we believe in for ourselves as an Anglican Communion – whether we want more or less communion, cohesiveness and inclusiveness. It is a discussion we need to have.

There may be ruptures ahead and the Anglican Communion may not survive this crisis in the form it has taken over the last 20 years. I heard the Archbishop of Canterbury telling the Anglican Consultative Council with deep confidence that they have to take the responsibility of making decisions this week. Now is not the time for closure. Conversations have to continue. Listening has to continue. Extra miles have to be journeyed, in the company of Jesus, seeking reconciliation and understanding to the nth degree. I think +Rowan is placing the future of the Communion in the hands of God and the ACC and expecting the delegates to take mature, adult, deeply Christian decisions about the future of the Communion.
Posted by Colin Coward at 02:48