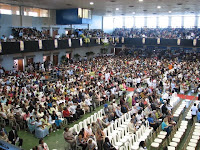 The Anglican Consultative Council 14 began formally yesterday with a welcome Plenary session in the afternoon. It took off this morning at a service in the National Arena in Independence Park, Kingston. Some 8,000 people filled the indoor arena which had been transformed into a liturgical space overnight. 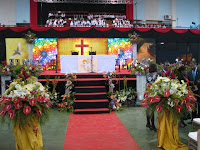 The service was short by Jamaican standards at 2½ hours but in all other respects was filled with the music and culture of Jamaica. The altar platform, altar, reredos, floral and artistic displays were stunning, delineated by white Corinthian columns. 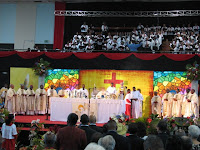 The Bishop of Jamaica and the Cayman Islands, the Rt Revd Alfred Reid presided and the Archbishop of Canterbury preached, without notes, as far as I could tell – but then Rowan can and does. In his sermon Archbishop Rowan had preached about our need for forgiveness, reconciliation, justice, and justice was a theme which ran through the service. 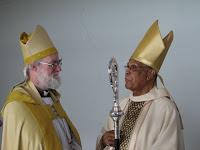 In the intercessions, Sister Phyllis Thomas of the Church Army began by praying for all entrapped in structures of injustice and all who struggle for liberation; for people who hunger for justice and freedom; that justice may be achieved for the oppressed, fears and tensions eased, and exploitation brought to an end; for those who need encouragement and support as they struggle against prejudice and injustice; for ourselves, that despite the cost we will avoid false divisions between personal and social aspects of salvation. 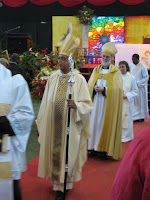 The hymns, songs and music in the service where all Jamaican or Caribbean, perhaps the most unusual to find its place in an Anglican service being Bob Marley’s One Love, sung during the peace, which reduced me to tears. It’s always an emotional experience at services like this to be greeted with such great enthusiasm and warmth.

The first hymn sung during communion had been written for the Antilles Episcopal Conference in Trinidad – Let us enter into covenant with Christ, celebrating the Eucharist of love. The second hymn had been specially commissioned for this ACC meeting and was written by Mervyn Morris and Noel Dexter. It could have been written for a Changing Attitude or Inclusive Church service.

Lord of our diversity,
unite us all, we pray;
welcome us to fellowship
in your inclusive way.

Teach us all to have respect;
to love and not deride.
save us from the challenges
of selfishness and pride.

Sanctify our listening
and help us get the sense
of perplexing arguments
before we take offence.

Teach us that opinions which
at first may seem quite strange
may reflect the glory of
your great creative range.

May the Holy Spirit now
show us the way preferred.
may we follow the commands
of your authentic word. 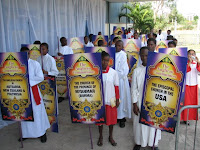 The Diocesan Festival Choir and Massed Choir where conducted with a verve that reminded me of the choir master in the Vicar of Dibley, and I sensed might be a kindred spirit. The choirs were partnered by organs, drummers and steel band, and all played and sang with a verve that made me long for Sunday worship in Devizes Caribbean-style – some hope! The Jamaicans I spoke to who have visited the UK and worshipped in Church of England parishes described their shock at our lack of energy and celebration in worship. I can understand why they perceive our churches to be somewhat moribund, if not dead, a terrible disappointment when they expected to be inspired by their ‘mother church’. 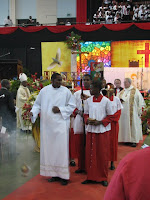 The bishops of the Province concelebrated and were led in by massed ranks of servers dressed in cassock albs. Incense was plentiful with two thurifers circling the altar while the choir sang a Jamaican Te Deum after communion.

I left the service feeling elated. The first 48 hours here have further restored my confidence in the Communion’s ability to recover from the traumas of the past 6 years. The Anglican Consultative Council meeting feels very different from Nottingham 3 years ago.
Posted by Colin Coward at 22:56