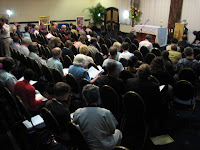 The Archbishop of Canterbury delivered his Presidential Address in the meeting room which has been used as a chapel for ACC-14 following evening prayer on Monday evening. The full text of his address will be posted online on Tuesday morning. Meanwhile, here is a transcript of hasty notes I took of the address. 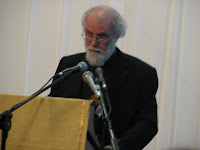 Achievement
He began by asking, what have we achieved? There is no absolute measure of achievement and in critical times, seemingly small achievements may in fact be larger ones. We got up every morning and prayed, studied the Bible, affirmed our will to stay in relationship, did some planning, about evangelism, church growth, etc. We agreed the substance of the Covenant and maintained a time scale.

Our willingness to act as one in certain areas and praying as one by God’s will is quite and achievement. The work of God can be seen in small and apparently routine things. God gives us the grace and liberty to plan and pray together. There is no evidence that we have no future together. 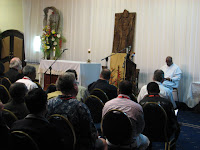 Nobody has moved very much in the last 10 days. The problems are not guaranteed a solution. There remains an intensely felt stand off between groups in our Communion. He referred here to the discussion held by the ACC on the Holy Land which for him had echoes of perceptions nearer home - the attitude from one side or the other that we have conceded something and you haven’t moved. Our divisions and fears are not as deep or poisonous as those between communities in the Holy Land. He talked about identifying with victims and said something shifts when people on both sides of a conflict are able to recognise one another.

Gays and lesbians scapegoated
Who bears the cost in our conflict, he asked. Christian credibility has been shattered by the scapegoating which lesbian and gay people experience. We are bound in a community in which scapegoating and rejection are very deeply ingrained. 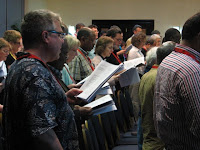 Others think that decisions people have made in other parts of the world mean that they cannot share Christian witness with their neighbours.

How are these two groups to come together for at least some recognition to be shared? I know that won’t solve the problem, he said. Part of the imperative is in dealing with it in a Christian way. If we talk of moratoria and cease fires this is only useful and serious if it is part of the background of recognition (of the other).

You are going back to your Provinces with a quagmire of detail and procedure. We did it because we hoped Christian people would be able to recognise each other a bit more fully, hopefully and generously. Good listening allows the other really to speak. 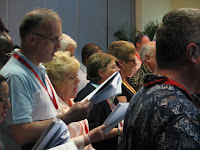 The second challenge is even more uncomfortable. We talked about the Covenant and sanctioned a measure of delay. We are committed to a basic timetable. Don’t delay consideration of the Covenant in your Provinces – pray and talk now. Any delay will be as brief as possible. Begin intelligent engagement as soon as you can. Some, many, may be reluctant to engage with the detail. The possibility of a certain kind of division is there.

Some speak of the future as a federation, dispersed, some talk of us being more strongly or less strongly bound together. There is a real possibility of having more and less strongly bounded Provinces. How do we preserve the structures that allow us to do what we want together? What are the structures, protocols, Instruments, that allow us to work together? We will need organs of life-giving exchange. Don’t write off the Instruments of Communion. What makes things impossible is the ceaseless rhetoric of fear and competition, rivalry and resentment. There will not be the flow of life unless we behave hopefully and respectfully as we deal with each other. 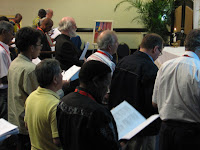 Lessons
What have we learnt here? We are not very good at resolution passing. At the next ACC I recommend briefing in advance about resolution procedures and how they work.

We have learnt to recognise that relations need to be deep enough and worked at enough, learning about God from one another. We are given to one another as believers – this is basic N.T. theology. We need to work on these relations if we are to be able to receive what God gives us.

We have been rooted in our host church in Jamaica for a time. We’ve seen what an ordinary, local church does – intermittently holy, intermittently a mess. Real church happens here on the ground.

The natural devastations, earthquakes and hurricanes, which makes structures very vulnerable, are a striking and potent metaphor. There is divine faithfulness at work, the church exists wherever it is set. Anglican investment is in the particularity of places and cultures. 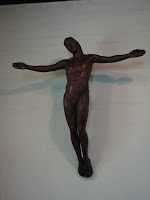 We are so preoccupied with talking about the autonomy of Provinces and not about particularity and the gifts we have to share. We have come to a deeper engagement through our study of the Gospel of Mark. The marginal characters in St Mark’s Gospel are the ones who see the point when the disciples don’t, the syrophoenician woman, Bartimaeus, the centurion at the cross. The Gospel of Mark is a celebration of the stupidity of the disciples and bad news for Christian elites, focussed on success and failure.

Maria Boulding, and English Roman Catholic writes that the alternatives are glorious and miserable failure. We fail and fail again but the grace of our Saviour is inexhaustible. Mark’s apostles finally decided to be glorious failures. If we ask whether this meeting has been a success or failure we should ask a few Mark-shaped thoughts.

First face your failure, not his or hers. Then ask how it could be made glorious. Ours is a flawed, fragile, precarious Anglican fellowship.
Posted by Colin Coward at 03:40