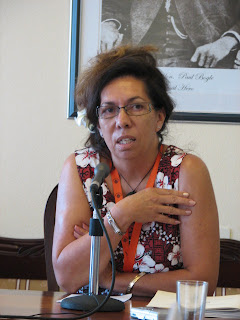 The press briefing this afternoon was attended by Jenny Te Paa from New Zealand, a member of the Peace and Justice Network, and George Browning, retired bishop of Canberra and convenor of the Environmental Network.

Jenny outlined the history of the Peace and Justice Network. Peacemaking was the prominent sentiment of the Network, the first to be formed, working on racism, sexism and fundamentalism. The group has visited many sites of struggle and conflict

The group evaluated its own life in 1995, recognising that it was composed primarily of bishops, and if not bishops, then their wives. It encouraged membership of lay people young people and women.

In 1995 in New York it met IMF officials and raised consciousness of third world debt. At the next meeting in Korea reunification was a major issue. In Jerusalem the Middle East and Palestine were the focus and in Rwanda and Burundi the civil war.

Following the 1998 Lambeth Conference the Network addressed human sexuality, raising it as a human rights issue. They focussed on the section of resolution 1.10 which assured homosexual people that they are loved by God and that all baptised, believing and faithful persons, regardless of sexual orientation, are full members of the Body of Christ. 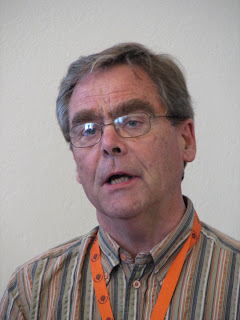 George Browning outlined the development of environmental concerns beginning in the 1950s and 60s which have come to the fore in the last 20 years. It is a major issue, which large sections of the church have difficulty in seeing as a core issue, believing evangelism to be the main activity of the church.

The Environmental Network is dependent on passionate people at a local level who take up the cause. His commitment is driven by his faith. It is a core issue for him, affected by consideration of what the world will be like for his grandchildren. There is a false dichotomy between the priority given to economic issues against ecological issues – both suffer together and need to be transformed together. The network aims to have representatives from every Province and to include business people, bishops and people from the grass roots.

I asked Jenny whether the Network continued to hold this view about homosexuality, which was in conflict with other section of Resolution 1.10 and whether they continued to address it. Yes, said Jenny, the issue of lesbian and gay people will be on the agenda until justice prevails. It is a topic they continue to discuss every year. Jenny said the use of hermeneutics in addressing the issue is being considered, looking at the misuse of scripture to support various positions on this matter.

In the Peace and Justice Network the Anglican Communion seems to have a group widely representative of the majority of Provinces which holds a view on homosexuality at odds with the policy of the Communion as expressed in Lambeth 1.10, a resolution which is deeply compromised and tries to face both ways.
Posted by Colin Coward at 02:00