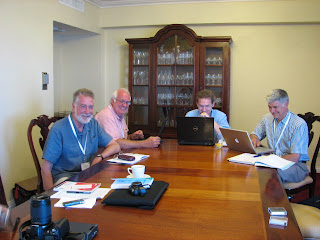 Last Thursday I was challenged by Canon Chris Sugden and David Virtue for having written than there are gay Primates. Their challenge (which seems to me to be totally unprofessional) happened around the table directly after the media briefing attended by Canon Phil Groves, responsible for the Listening Process. I was so disturbed by the encounter with Chris and David that I forgot to post a report of the media briefing.

Canon Groves reminded us that his is a monitoring role, not an advocacy role. Gay and lesbian people are part of every diocese, but not in the centre of the room, not seen or heard across many parts of the Communion. There is a genuine lost opportunity for mission when the Church doesn’t listen to lesbian and gay people. Without a process of listening to lesbian and gay people, how are members of the Mothers’ Union, Youth Leaders, etc., going to learn about the reality of the world they live in and hear the experience of lesbian and gay people? 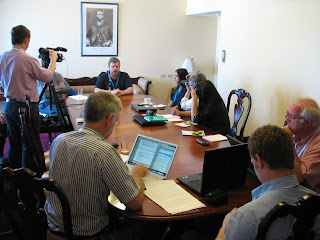 I asked Canon Groves how LGBT might be heard and find a place on the Instruments of Communion. In the ACC, Lambeth Conference and Primates’ Meeting we are still talked about rather than listened to or with. The moratoria and listening process both extend the period in which LGBT Anglicans in the west continue to wait for full affirmation by their churches.

He said that the Instruments are not fully representative of other groups such as women and young people. There is no mechanism to enable lesbian and gay people to be given places in the Communion Instruments and Canon Groves wasn’t sure such a move would be appropriate.

David Virtue told him there are tens of thousands of ex-gays in the Communion and he is not listening to their voices. He referred to the Anglican Mainstream ‘Sex and the City Conference’ where he said there were hundreds of people saying they wanted out of homosexuality. David Virtue wanted Chris to look at the work of Mario Bergner and the Zacchaeus Fellowship and consult Peter Ould and Terry Buckle and make their work part of the Listening Process – not so much a question as telling Phil how to do his job. 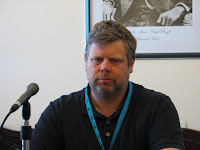 He was questioned about the Indaba process which will be used inappropriately, he was told, in the Listening Process. Canon Groves defended Indaba, used the image of the family – the church family is loyal to Christ, a new community. The church takes society and works to transform it into Christ. We assume that the western societal values and models we work with can be trusted, but they are as open to abuse as Indaba can be.

David Virtue made a statement rather than asking a question. Canon Groves talks a lot about culture. The view of homosexuality held my Emanuel Kolini, Henry Orombi, Peter Akinola and himself needs no more theological discussion. He and they come from different cultures but there is no difference in their attitude to homosexuality.

It’s about human rights in the west and community rights in Africa, said Canon Groves. The Virginia Report talked about the good news of Jesus Christ in particular cultures. Culture changes the way people understand the Gospel. Canon Groves said he had discovered the gospel as it is lived in Uganda working alongside Archbishop Orombi. We are always enlightened by seeing the gospel through the eyes and experience of another culture.

Robert Lundy asked how the Listening Process will help the Communion makes decisions that stick. The question, said Canon Groves, is how we include people in the journey we make together in making decisions. Our process may not work and we can’t say that the process will be the answer to all out problems. In Corinth, St Paul calls the Christians there to recognise Christ as Lord of one Church. He asks them to be part of a journey to the truth. 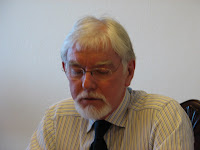 Before Canon Groves, John Rees, Legal Advisor to the Anglican Consultative Council, had talked about the Constitution and legal issues affected by UK charity and company law.

He was quizzed about the refusal to seat Philip Ashey by Canon Chris Sugden, which produced my favourite press briefing moment. Chris writes his questions before hand, something I would do if only I could work out in advance what my question might be. John Rees’s response to Chris’s lengthy question was: “I’m not sure if that’s a question or an essay, really.”
Posted by Colin Coward at 17:15