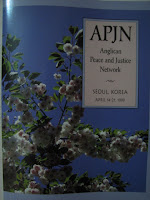 I have managed to acquire a copy of the report compiled by the Anglican Peace and Justice Network from its meeting in Seoul, Korea from 14-21 April 1999, referred to in yesterday’s press conference.

The sixty page report outlines thirteen areas of concern, the final one being a report from the panel on homosexuality. The report says:

The Anglican Peace and Justice Network (APJN), in response to the Lambeth resolution to engage in dialogue with the gay and lesbian community, heard a presentation from both lesbian and gay men’s organisations from Seoul, Korea. Much of the emphasis of the presentations focussed on the human rights aspects of gay and lesbian issues. The speakers noted the church as a major source of repression of homosexuals and asked that the power of love given in Jesus Christ be used as a basis for understanding and accepting gay and lesbian people.

The APJN recognised deep divisions on the subject of homosexuality that surfaced after the Lambeth resolution, especially the section on how scripture is used to discuss homosexuality and on the blessing of same sex unions and ordaining those involved in same gender unions. These concerns exist largely in the Anglican Communion’s northern provinces, but also emerge elsewhere in the Communion and should not be seen exclusively as a Western subject. The Network agreed to continue to consider the justice dimensions of the debate over homosexuality, in the hope of contributing to the dialogue called for in the Lambeth resolution.

The Network asks the ACC to affirm that human rights exist for all people and that there can be no exceptions to the universal principles of those rights in the UN Declaration, including the rights of gays and lesbians. Further, the ACC is encouraged to recognise that homosexual persons are children of God and to affirm that section of the Lambeth resolution that assures the church’s gay and lesbian members “that they are loved by God…and are full members of the Body of Christ.” This affirmation is crucial to the well being of our church communities where gay and lesbian members are present. Finally, the Network asks the ACC to consider ways in which dialogue on Anglican approaches to interpretation of Scripture may be implemented so that the Communion may better engage the general subject of human sexuality.

The APJN report from Korea is not available on the Anglican Communion web site. The ACC meeting held in Dundee in September 1999 passed a 3 line resolution from the APJN: http://www.anglicancommunion.org/communion/acc/meetings/acc11/resolutions.cfm#s16. The report was welcomed and commended to the Provinces for reflection and action.

The third paragraph from the panel on homosexuality asked the ACC to affirm, encourage and consider action. It did none of these things because the paragraph asking for action was withheld, apparently on the instruction of the Archbishop of Canterbury, George Carey.

The APJN seems to hold a position towards lesbian and gay people which is at odds with the position adopted by the entirety of Lambeth resolution 1.10. The breadth of representation at the Seoul meeting was from across the whole Communion, and the members of the Network were united in their support for the panel on homosexuality. One person present at the meeting agreed that lay people and those in touch with the grass roots were far less prejudiced about or obsessed with homosexuality as an issue than their bishops and primates.

Yesterday was the first time I became aware that the APJN had addressed homosexuality and made recommendations to the ACC. The report was effectively suppressed. Thank goodness someone had brought a copy to Jamaica. It is still possible that the APJN will help direct the Communion to a more understanding and positive commitment to the rights of lesbian and gay (and next time, bisexual and transgender) people. I’m not holding my breath, but I keep discovering hidden resources which have the potential to help change the whole Communion’s attitude.
Posted by Colin Coward at 03:47