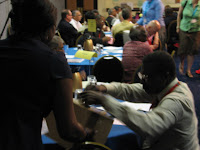 The delegates at ACC-14 are voting on the text of the Windsor Continuation Decision Process resolution this morning. They are taking a coffee break at the moment, but here is the text as it stands at present, with one amendment already agreed, replacing notes with affirms in clause (b).

a. thanks the Archbishop of Canterbury for his report on the work and recommendations of the Windsor Continuation Group,
b. affirms the recommendations of the Windsor Continuation Group,
c. affirms the request of the Windsor Report (2002), adopted at the Primates’ Meetings (2005, 2007 and 2009), and supported at the Lambeth Conference (2008) for the implementation of the agreed moratoria on the Consecration of Bishops living in a same gender union, authorisation of public Rites of Blessing for Same Sex unions and continued interventions in other Provinces;
d. acknowledges the efforts that have been made to hold the moratoria, gives thanks for the gracious restraint that has been observed in these areas and recognises the deep cost of such restraint;
e. asks that urgent conversations are facilitated with those Provinces where the application of the moratoria gives rise for concern;
f. encourages the Archbishop of Canterbury to work with the Joint Standing Committee and the Secretary General to carry forward the implementation of the Windsor Continuation Group recommendations as appropriate,
g. asks Inter-Anglican Standing Commission on Unity, Faith and Order to undertake a study of the roles and responsibilities in the Communion of the Archbishop of Canterbury, the Lambeth Conference, the Anglican Consultative Council and the Primates’ Meeting; the ecclesiological rationale of each, and the relationships between them, in line with the Windsor Continuation Group report, and to report back to ACC-15;
h. calls the Communion to pray for repentance, conversion and renewal; leading to deeper communion.
Posted by Colin Coward at 16:56