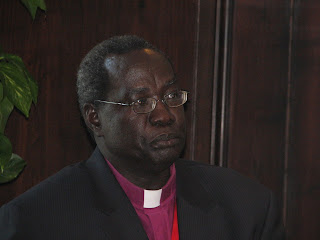 I was present at the press conference in Alexandria in February when David Virtue asked Archbishop Daniel Deng of the Episcopal Church of Sudan whether he had changed his stance from the statement made at the 2008 Lambeth Conference. Then, he called on Gene Robinson to resign and The Episcopal Church in the USA (TEC) to repent.

Archbishop Deng replied: "We are asking that within the primates meeting, and the situation on the statement remains the same. We have not deviated. What is needed is for churches in the Anglican world to wrestle with these issues so it comes to an end." He spoke at the Primates Meeting, not because homosexuality and Gene Robinson were on his mind but because David Virtue asked a question irrelevant to the topic the Archbishop was there to address. 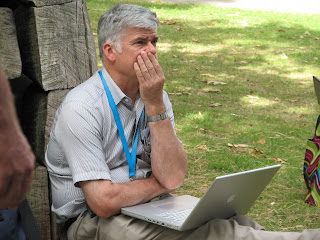 Canon Chris Sugden has returned to the Archbishop’s comments in an article written for the March issue of Evangelicals Now. He carefully outlines the growth being experienced by the Church of Sudan and the poverty which affects the church. My diocese is Salisbury and our link Province the Sudan. I was present in the cathedral for the pre-Lambeth welcome service. I know of the profound challenges faced by the Church there.
Chris argues that Archbishop Deng has the courage to forfeit $100,000 from The Episcopal Church in the USA, refused “because he continues fearlessly to call TEC to account by saying that there is no solution for the current crisis in the Anglican Communion till TEC repents and undoes what it did in making Gene Robinson a bishop. He does this because same-sex relations are a primary issue and he is prepared to sacrifice the desperate needs of his people and church to uphold his position on homosexuality.”
The apparent integrity of this statement doesn’t convince me. Archbishop Deng is willing to enjoy the fruits of his Province’s relationship with the Diocese of Salisbury and the hospitality freely given here. The Archbishop, so determined to punish Bishop Gene Robinson and The Episcopal Church is nevertheless able to compromise his principles and share worship in Salisbury Cathedral with partnered lesbian and gay clergy, myself included.
Chris Sugden says Archbishop Deng shares the strengths of transparency and accountability with the primates of Tanzania, Rwanda, West Africa, Uganda, Kenya, Nigeria, and Southern Cone. Transparency and accountability are not words that come to mind when I consider the statements made by then Canon Tunde Popoola on behalf of the Church of Nigeria about Davis Mac-Iyalla. If Chris Sugden wants to maintain transparency, accountability and integrity across the Communion, he should brief Archbishop Deng about senior, partnered lesbian and gay clergy in Salisbury Diocese and advise him to refuse money and sever the link.
I hope and pray Archbishop doesn’t do any such thing. Perhaps it’s only bishops who are gay that worry Archbishop Deng. Perhaps it’s just TEC bishops who are gay that worry him.
Archbishop Deng told his impromptu press conference at Lambeth Conference that some of his people were being killed by Muslims because they were identified as members of the Anglican Communion that condones homosexual practice. He should also know that in countries in Europe, North America and Africa, homosexuals are killed because of their sexuality. It is the Muslims and the homophobes who kill who are in the wrong, and the Christians and lesbians and gay men who need protection and justice.
Posted by Colin Coward at 15:02