Davis Mac-Iyalla, Director of Changing Attitude Nigeria, is in Belgium this week for a series of meetings with secular and Christian groups and individuals. Here is his report of the first three days:
I arrived safely in Brussels on Monday and met with Nissim from the Marhaba Muslim LGBT group for dinner. We discussed the situation of his group and the role they are playing to support LGBT Muslims in Belgium and I talked about the history of CA Nigeria from the beginning to the present day.
Tuesday
I began with a visit to ILGA Head Office and met with Patricia Curzi who is the Women’s Project Coordinator. Steve Barris and other colleagues are on vacation at this time. I raised the issue of the lies being told by the Nigerian Government about the non-existence of LGBT people or groups in Nigeria and the concerns we have. I talked about CA Nigeria and the journey so far as well areas where we need ILGA to collaborate with us. We talked about the structure of CAN and Pan-African ILGA. We also discussed the possibility of training Human Rights Defenders in Africa. The meeting lasted for two hours and Patricia promised to convey my message to the Board of ILGA and thanked us for coming.

My next meeting was at the Belgian Parliament. I meet with five members of the Belgian Parliament and again raised the issue of Nigeria. I was able to tell them about CA Nigeria and what we are doing as a group. I told my story and asked them how refugees like me can be supported and what resources are available to help us. The parliamentarians listened carefully and promised to take up the Nigeria Human Rights issue with their colleagues who are responsible for foreign affairs. They noted different possibilities they can activate to support LGBT rights in the developing countries and promised to bring me back to address a wider audience. 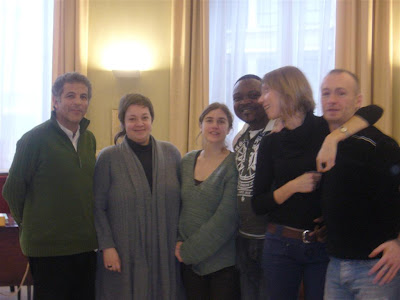 I went from the Belgian Parliament to be interviewed for a Dutch Daily News Paper.

After the interview I went to the European Parliament to meet with the Chairmen of the Intergroup. I was feeling so important walking into the EU Parliament only to be told that I can’t enter without a photo ID, but I hadn’t brought my travel documents with me. The clerk called the MP to come in person to take me in. I raised the issue of the Nigerian Government and told the MP how angry we are in CA England and Nigeria with the Human Rights report. I was able to tell our story and asked that the Intergroup help us put out a statement. EU MP Michael assured me he will do everything in his power to follow the issue. He explained the structure and functions of the Intergroup within the European Parliament.

I left the European Parliament assured that our case will be taken up by the authorities.

The next meeting was at the Amnesty Office where officials of the LGBT Chapter of the University in Brussels came to hear me talk and asked how they can support and work with CAN. I told the story of CAN and the situation of LGBT people in Nigeria up to the present time when I was granted refugee status. The students have agreed to invite me soon so I can speak to a wider audience. Many questions were asked by the members of the LGBT Chapter. Other people were taking notes during all these meetings and I am sure more reports will be posted from other sources. 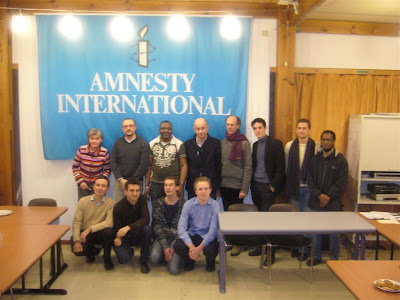 I met Andre Nuyttemans, who is a theologian and a counsellor in a Catholic school in Brugge. Andre has been involved with the European Gay and Christian Movement for over twenty years and knows most of the leaders in the UK. He asked me to extend greetings to Richard Kirker whom in his word he called a fighter for freedom.

Andre told his story of how he was raised as an orthodox Roman Catholic boy with a strong conservative background but found his life changed at the age of twenty when he realised he was gay and never wanted to be with a woman.

He was lucky because at that time his parish priest who was not gay was very supportive when he went to confess his sexual orientation during mass. He told us it was the priest who told him not to enter into the priesthood since the Catholic Church will not accept him for who he is. With the encouragement of his priest he was able to apply for a secular university and not the Catholic seminary that his parents wanted him to attend at the time.

At the university he became more open with his sexuality but thought less of his membership with the Catholic church. It was his priest who visited and made him realise that it is much more easy to change the church from inside than outside. That is how he picked up his faith again and has been involved with various support groups to the local LGBT people who are mostly Catholics. It was interesting to meet more than six Catholic Reverend fathers who told me more than I ever imagined about the Pope and the Roman Catholic church. They concluded by saying the Pope knows that once gay people are stopped from entering the priesthood that will be the end of unmarried priests in the Catholic church. I now understand that from the back door; authorities of the Roman Catholic Church turn a blind eyes to the many gay priest, bishops and officials while the Pope can express negative views in public. I never knew the Pope has a made up artist until yesterday. The artist has now been asked to keep a distance because fingers are pointing to him.

I shared my story and talked about CAN and what the Nigerian Government and political leaders are doing to silence LGBT people in Nigeria. At the end of the meeting fresh Belgian beer was served which is made from the hands of lesbian monks to celebrate my visit. (That’s what Davis wrote!)

I posed for an artist who wants to make a portrait of me and ended the evening with curious young Belgians who wanted to know how it feels to be black, gay and Christian and be so lively about everything!
Posted by Colin Coward at 13:43