Primates meeting Day 2 - What has changed? 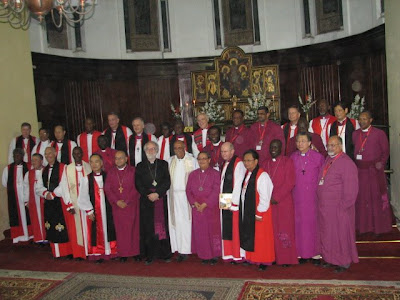 I can only speculate on what has changed at this Primates’ meeting and what the reasons might be. We have moved on from where we were two years ago. The work that has been done by Archbishop Rowan, the staff at Lambeth Palace and the Anglican Communion Office in relation to the Lambeth Conference, but more especially I suspect, in quiet work building relationships and understanding behind the scenes, have radically changed the dynamics. However the conservatives might like to spin it, last year’s Lambeth Conference was a great success despite the absence of nearly a third of the bishops.

Conversations with some of the Primates and staff members reveal that changes have been taking place behind the scenes. According to one source, every Primate present in the hotel on Sunday morning was present at the Communion service and received communion, including those who absented themselves from Lambeth. The Presiding Bishop of The Episcopal Church, Katherine Jefferts Schori wasn’t present – she doesn’t arrive until today, but Archbishop Fred Hiltz of Canada was. One reason for refusing to come to Lambeth was the presence of those who had consented to Gene Robinson’s election and consecration. Will full participation in communion continue once Presiding Bishop Jefferts Schori has arrived?

In my Sunday blog, I assumed that we would meet most of the American and UK conservatives who have regularly been present on the outside of these meetings – Bishop Martyn Minns, Bishop David Anderson, Canon Chris Sugden – I was wrong – they are not here – only David V and George C. I was told yesterday that they were given strict instructions not to come, probably by the Archbishop to whom they owe prime allegiance.

Their decision not to come reflects a profound change of authority and tactics within the broad conservative coalition.

One corner might be represented by Bishop Martyn Minns and his determination to misrepresent the issue facing the Communion as a battle between tired, old colonial powers who have lost their Christian vision (coupled with an increasingly direct attack on the status and authority of the Archbishop of Canterbury) and the numerical and spiritual ascendancy of the Global South Provinces. Canon Chris Sugden of Anglican Mainstream is a key supporter in this strategy.

A second corner might be represented by Presiding Bishop Gregory Venables of the Southern Cone, who has taken a number of dissenting North American bishops and dioceses under his wing. The advice from this corner is that the conservatives have to respect the processes of the Anglican Communion and the four instruments of unity which are the only bodies where authority is rooted. 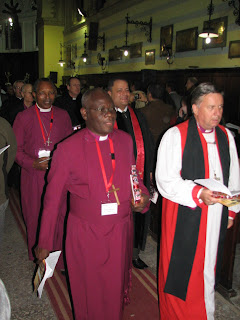 The third corner might be represented by Archbishop Peter Akinola, who greeted me warmly in the foyer of the Helnan Palestine Hotel yesterday. Archbishop Peter articulates the view of many that the ordination and consecration of lesbian and gay priests and bishops and the blessing of gay relationships is contrary to church tradition and the teaching of scripture. We respect the integrity of this position while radically disagreeing with it. Changing Attitude has always been ready to engage with the process initiated by the Primates in the Windsor Report. It seems that African and other Primates and bishops are now willing to return to full engagement. For us, this includes the listening process which has been categorically rejected by many of them.

Some of the anger and frustration that many African Primates and bishops felt with The Episcopal Church following Bishop Gene Robinson’s consecration seems to have been played out. I detect a real willingness to move on now from reactions to an event that happened in 2003. The signs are that every Primate is now willing to return to the table laid out by Archbishop Rowan, where a welcome has always been guaranteed. Still on that table are the Windsor Report and the Covenant. Changing Attitude disagrees strongly with both documents if their intention is to inhibit the full inclusion of lesbian, gay, bisexual and transgender people in the Communion. 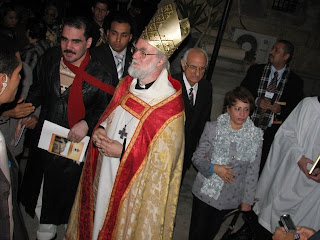 We support both documents if they are able to focus our hearts and minds on the mission and ministry of the church in Christ Jesus. We have always seen the way forward as one which will take time, as all of us, reacting to the events of the last 6 years from different standpoints, come to a common heart and mind through dialogue and the building of new understanding through relationship.

The advantage of having come to Alexandria is that personal conversation and encounter is the only way to grow together and achieve a real change of heart on all sides. This is what is already happening for us. I am picking up signs of a movement of real change away from the threats of schism and splits of recent years, back to the centre, to a focus on Christ who draws all people to himself in unity and a respect for the integrity of the Anglican Communion.
Posted by Colin Coward at 09:33