Tuesday evening’s press conference focussed on Zimbabwe, which had been the subject of the Primate’s session on Monday evening. The Primate of Southern Africa, the Rt Revd Thabo Makgoba and the Rt Revd Albert Chama representing the Province of Central Africa came to speak directly of their experience. The Primates’ Statement on Zimbabwe can be found on the Anglican Communion website. 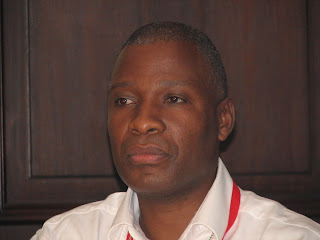 Archbishop Thabo spoke of the urgency of the situation in Zimbabwe, the total collapse of the economy and the socio-political structure. He stressed that Robert Mugabe’s power is illegitimate and he needs to step down. The cholera epidemic is ravaging the population and affecting South Africa as well, and SA is receiving countless refugees. We would be failing God, he said, if we don’t intervene, he said, quoting Matthew 25.35 – “when I was hungry, you fed me.”

Both Archbishop Thabo and Bishop Albert spoke of the tensions between Bishops Nolbert Kunonga and Elson Jakazi, the former Anglican bishops who are still holding on to church properties, and Sebastian Bakare the new bishop. Bishop Albert described his amazement at how faithful the people can be towards their God. They are locked out of their churches and have to meet outside to pray and worship and celebrate communion. Other churches have offered hospitality but they are then targeted by the police. Bishop Sebastian offers oversight and what protection he can to these faithful Anglicans.

When there was the 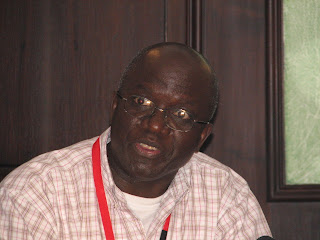 possibility of an inclusive government being formed, the police began to change, he said, and their violence against the general population diminished, but now Zimbabwe is back to square one and threats to the lives of church leaders have resumed.

Questioned by David Virtue about Archbishop John Sentamu’s call for armed intervention, Archbishop Thabo Makgoba carefully set out the actions he would like to see taken to secure the hoped for transition to a new government. We don’t want to see another massacre, he said. We see people being kidnapped and killed every day.

David Virtue wasn’t satisfied with this answer and repeated his question, which Archbishop Thabo generously responded to again. I was awed by Archbishop Thabo’s profound calmness and wisdom as he described the events taking place in Zimbabwe and the terrors and threats to which Anglicans are being subjected, not just by the state forces but by their deposed bishop.

The story David Virtue was hunting for was clearly that of a conflict between Archbishops Sentamu and Makgoba. He didn’t seem to have been aware of the extraordinary presence of two holy and thoughtful Anglican leaders from southern Africa, the courage they show and the tragedy they described. More shocking than that was David’s parting remark as he left the press conference – “I want sex stuff.”

Changing Attitude is committed to our Communion and to all our Primates and bishops, and we live with the most profound respect for those ministering in extreme circumstances. We call upon our supporters to ensure that their churches and parishes attend to the call of the Primates to join with the Anglican Church of Southern Africa in observing Wednesday 25th February 2009, Ash Wednesday, as a day of prayer and solidarity with the Zimbabwean people.
Posted by Colin Coward at 08:03