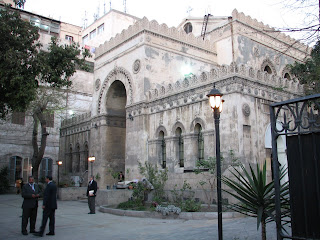 The Primates emerged from their secluded out of town hotel on Sunday evening to attend the Installation of the Very Revd Dr Samy Fawzy Shehata as Dean of St Mark’s Pro-Cathedral in Alexandria. The buzz and bustle of local life around the Cathedral is in marked contrast to the serenity of the Montaza Gardens. During the service the Muslim call to prayer could be heard along with the sounds of street life.
The local congregation filled the pews that were not already occupied by the Primates. This was clearly a great occasion for them, to have their Dean installed in the presence of Archbishop Rowan and the Primates (not forgetting Colin and me). The service was in Arabic, with a thoughtfully provided accurate English written translation.
For me the highlight of the service was the singing of an Arabic hymn around the theme `You have said Come to me all you heavy laden and I will give you rest’ - the joy and energy in the singing lifted my spirit, and maybe in another setting would have called forth a dance. Would have been great to see the Primates free to dance in praise to God!
++Rowan preached the sermon – he spoke of the busy-ness in church life, where people are busy doing things for God, whereas the most important work that takes place in church is Jesus praying. When we recognize that Jesus is praying in our neighbour who is praying, then our perspective will change. While the primary audience was the local congregation, and the need for the Cathedral to be recognised as a place where Jesus is praying, it could perhaps be understood as a challenge to the whole Communion, and to the Primates in particular, to put less reliance on structure and hierarchy (the busy-ness of people) and to recognize that we are a community where Jesus is praying.
Pity that we sang Onward Christian Soldiers as final hymn – this area has seen more than its fair share of religious wars and the words of the hymn jarred with me; there are surely other more helpful metaphors of the Christian life. 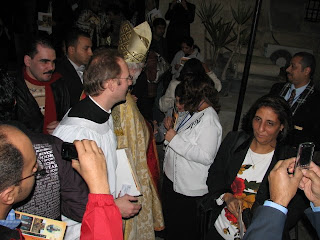 Egypt was among the first countries to adopt Christianity; tradition has it that St Mark began to preach here in 45CE, and Christianity became the state religion in the 4th Century. Word quickly got round the staff in our small very friendly downtown hotel that they were extending hospitality to two out and proud Christians. By sign language one of the housekeepers told me she was Anglican, and greeted me with hugs; she then brought another Christian colleague to greet me as well. Our presence seemed to be an encouragement to them.
Posted by Brenda at 11:06