Bishop Don Harvey, moderator bishop of the Anglican Network in Canada was Anglican Mainstream’s speaker at their fringe meeting on Wednesday lunchtime. I arrived somewhat later, unsure whether the Director of Changing Attitude would be welcome. I’m told he began his address by saying the Network is not obsessed with homosexuality and then spent the next 30 minutes talking about it.

He listed all the wicked things that have been happening in Canada, including the 1 million dollars it will cost both sides in litigation. The Church of Canada was blamed for everything. Referring to the invitation of the Canadian Primate to take issues up at Diocesan level and negotiate, he said this was like negotiating a settlement after a divorce – the split has happened and this is now history.

Numbers
What is happening in Canada is being blessed by God. Two years ago, they had 2 bishops, 2 priests, 2 deacons, 2 parishes, and now they have 3 bishops (all brought out of retirement until they get new bishops from within the new church), 68 priests, 27 parishes – the Lord is blessing us, he repeated. We have an average Sunday attendance of 3,500, bigger than 9 Canadian dioceses. There are bishops in England sympathetic to them, he said. In the worldwide Communion, Primates who lead 45 million Anglicans, have given their support.

Later, without any sense of irony, he said that others use statistics to buttress up the case they are trying to make, but they are people who have lost sight of the biblical message – Pentecostals are attracting people in Canada in a real way, we need to do the same.

Bishop Greg Venables (who greeted me warmly again in Alexandria) has taken them under his wing, not as part of the Province but as a gentleman’s agreement.

Expectations of the Primates meeting were far too high. If you wait for Primates or the Anglican Consultative Council to launch a new Province, we will never get it. We have to initiate, maybe piecemeal, until we get a majority of the Primates to support us.

The office of the Archbishop of Canterbury is held in great esteem, and with prayer, we will get the support of the ABC. He is walking the yellow line and so far we have heard nothing negative from him.

My reflections
It’s all very familiar, and was delivered by a bishop who is clearly likeable and passionate. Those listening to him were enthusiastic about his message. Those around the table I joined assumed without question that I agreed with them. I applauded to ensure I wasn’t lynched by a rather frightening looking woman who kept turning to share her enthusiasm. I was relieved to see liberals at the adjoining table and spread around the room. Later I discovered some of them were relieved to see me arrive, confirmation that they hadn’t made a mistake.

Blame is endemic to the conservative narrative. It is our, liberal fault, we who believe we are maintaining the tradition of Anglicanism against those who are trying to destroy the Elizabethan settlement and create a schism. What they are doing is blessed by God and they are right. There is no sense of the complexity of human feelings and actions, no thought that those they oppose might also have a degree of integrity and a conviction that what we believe is has a holy dimension and stands in a great tradition of the biblical call for justice.

They live in hope either that the Archbishop of Canterbury will recognise them, or they achieve success by force of numbers. Nothing that happened at the Primates meeting last week should give them any hope of success. The ABC and the Global South Primates were inside the meeting and all signed the final letter.

Changing Attitude at Synod
We had a display as usual in the Charter Room. This time, we brought two of the panels from our stand in the Market Place at Lambeth. I’d bought a suit on Monday for reasons not connected with Synod and arrived wearing it, causing shock in many who are used to my usual more casual style. 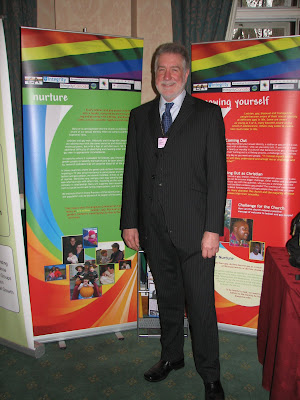 On Tuesday, John Plant from MCU and General Synod, and Ruth Gledhill of the Times, shared a moment of hilarity with me. I add this picture as an example of the many warm conversations and encounters that are possible at Synod. Changing Attitude has created many friendships with a diversity of Synod members and media people which have helped communicate our message. 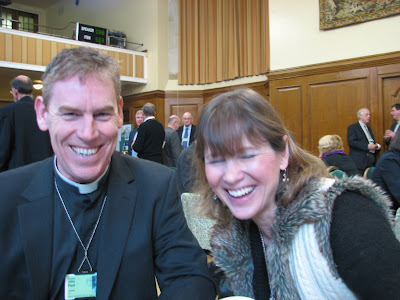